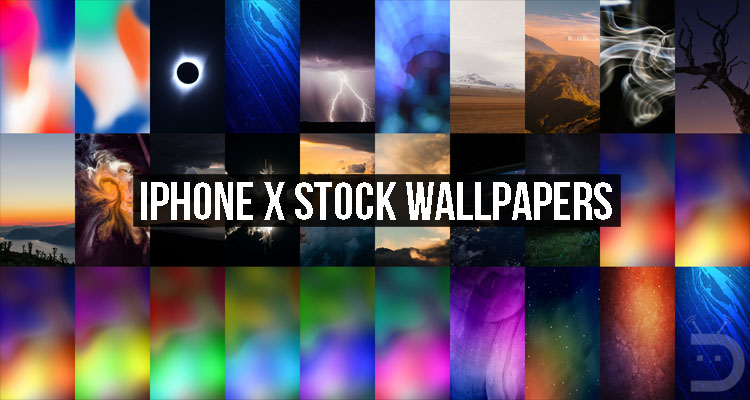 As is the case every year, fans around the world and tech enthusiasts were eagerly awaiting this year’s iPhone launch. But the wait was extra special this year because 2017 marks the 10th anniversary of the original iPhone launch. This year’s Apple keynote was the first ever to be held in the Steve Jobs Theater located at the Apple Park. Apple announced an array of products from Apple TV, Apple Watch Series 3 and obviously the iPhones everyone was waiting for. Cupertino announced three iPhones this year, the iPhone 8, iPhone 8 Plus and a special edition iPhone X. With new smartphones though, in general, arrive new wallpapers. And now we have those brand new iPhone X stock wallpapers.

The anniversary edition iPhone X comes with a near bezel-less display which seems to be the growing trend these days in the smartphone industry. With the new 5.8 inch, not so 2K (1125 pixels by 2436 pixels), Super Retina OLED display, the new iPhone is sure to catch some eyeballs. But the lack of bezels isn’t the only exciting feature that the iPhone X has. Under the bright and shiny OLED display lies the powerful hexa-core A11 Bionic chip from Apple. From what we’ve seen so far, at least in benchmark results, the new chip from Apple is crushing the competition.

The iPhone X (and the other new iPhones) mark a shift in Apple’s all-metal unibody design. iPhone X has an all-glass back which isn’t as much of a design choice as it is having no other choice. This is because Apple is finally jumping on the wireless charging bandwagon and a metallic back wouldn’t allow that. Yes, iPhone X supports wireless charging via the popular Qi standard. Once again, a glass back isn’t the only design change on the iPhone X.

A (near) bezel-less design also means no space for a fingerprint sensor. Sure there is still space on the back but this is Apple. So there is no fingerprint sensor on the iPhone X. Instead, it uses Face recognition to unlock the screen. Apple calls it Face ID and before you think Android has that for years, there are some details you should know. The iPhone maker has added new sensors around the front camera on the iPhone X. According to Apple, these sensors create a 3D map of the user’s face. As a result, unlike Android’s face recognition, Apple’s Face ID can’t be fooled by a picture of your face. That is the case in theory at least. We will know when the iPhone X finally does come out to the hands of consumers and reviewers.

You can order the iPhone 8 and 8 Plus right now but it will be a while before you can get your hands on the X. Apple has announced that iPhone X pre-orders will begin on 27 October, with shipping to begin 3 November. It will be made available in 64GB and 256GB configurations, which will fetch £999 and £1,149 in the UK, respectively. Pricing in the US starts at $999. Apple will also make the handset available through its iPhone Upgrade Program, with monthly payments. But you don’t have to wait for or spend as much to get your hands on the new wallpapers from the device.

As mentioned in the beginning of this post, we do have the brand new wallpapers from the iPhone X. We’ve included the wallpapers below so you can pick and choose each one individually. In case you’d like to download all of them at once, we’ve got you covered there as well. Below the images, at the very bottom of this post, you can find download links for a zip file. The said zip file contains 30 wallpaper from the anniversary edition iPhone.