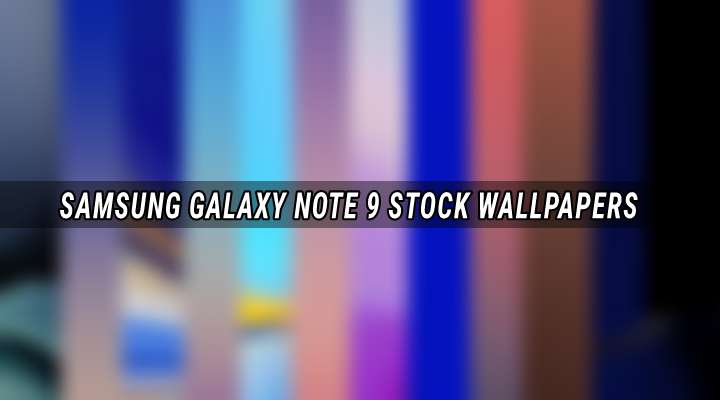 The Samsung Galaxy Note 9 wallpapers are here. As for the phone, it is just nothing more than an incremental upgrade over its Note 8 predecessor.

Korean tech giant Samsung took the wraps off the new “Super Powerful Note” on August 9th, 2018. Yes, you guessed it right, Samsung introduced the new Galaxy Note 9 at Samsung Unpacked in New York City yesterday. By the looks of it and what it seems to offer, the Galaxy Note 9 seems to be just an incremental update over its Note 8 predecessor. Speaking of which, the tech giant is actually busy focusing on bringing a totally reimagined flagship 2019, the Galaxy S10 or X or whatever it is going to be called.

Thankfully, a dedicated MicroSD card slot (utilizes SIM2 slot on dual-SIM models) that can handle cards of up to 512GB in size is available in the device for expanded storage. Providing visuals is a 6.4in 1440 x 2560 pixels Quad HD+ HDR10 compliant AMOLED Infinity display with an aspect ratio of 18:9 and a sharp pixel density of 516 PPI. As expected from any high to mid-range Samsung device in the recent past, the Galaxy Note 9 is IP68 dust proof and water resistant.

Galaxy Note 9 features an all-new Bluetooth enabled S pen that can help capture images via the Note 9’s camera along with various other tricks by functioning as a remote control. Speaking of which, the new S Pen is powered by a supercapacitor that helps it stay charged for half an hour to be able to use the Bluetooth features (of course, if the battery dies, you can use other usual S pen features like you did in previous S Pens in the past). Charging is done by simply inserting the S pen into the Galaxy Note 9 and to fully charge it to 100% only takes just 40 seconds.

A massive and impressive 4000 mAh battery is onboard the giant Galaxy Note 9 to provide decent enough juice to keep it ticking on and also the device comes bundled with a 15W Adaptive Fast Charging charger to top it up fast enough in the morning via the USB Type-C port. Coming to the connectivity side of the Galaxy Note 9, it has you all covered but with a catch as in it has Wi-Fi 802.11 a/b/g/n/ac, Bluetooth 5.0 LE with AptX audio codec support, A2DP and EDR, GPS and more. Thankfully, the device retains the good old headphone jack we all love. The Galaxy Note 9 runs on Android 8.1 Oreo-based Samsung Experience UI 9.5 out of the box.

In the US, the 8/256GB and 6/128GB variants of the Samsung Galaxy Note 9 will set you back $999 and $1250 respectively and will be available on major carriers in the country. The device will be only available in Lavender Purple and Ocean Blue in the US market. In the UK, the device will cost £899 for the 6/128GB variant and £1,099 for the 8/256GB variants and the country will get three colors namely the Might Black, Lavender Purple, and Ocean Blue. The device will be available starting August 24, 2018, at stores in various parts of the world along with of course the aforementioned regions.

We have got our hands on the official stock wallpaper(s) that is present in the Samsung Galaxy Note 9.

Download the Zip via the links given below or click to enlarge the wallpaper(s) available below and then save it to your phone or PC. The resolution of the wallpaper(s) is 2560 x 2560px. The wallpapers look and feel identical to those featured on the Galaxy Tab S4.