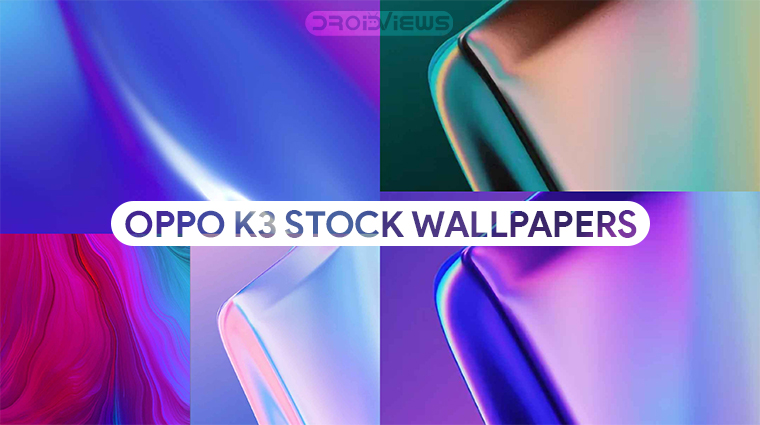 Oppo is one of the companies that have been coming out with more and more phones and flooding the market. Most of these devices fall in the premium budget segment. The Oppo K3 is another such offering from the company with a premium mid-range processor and a motorized popup selfie camera. It also brings with it some new wallpapers. The Oppo K3 wallpapers are available for download below.

Oppo K3 uses a motorized pop-up module for the selfie camera in order to avoid the notch. But amongst phones with no-notch and all screen displays, this one probably has the biggest chin. It’s definitely a noticeable size, although not as bad as some other phones with notches. It seems a bit more awkward not having any bezel at the top and some at the bottom.

The back of the phone looks anything but generic. The dual camera set up on the back has been aligned vertically in the center, and the modules are separate instead of being one long vertical black strip. A strip is present though, in the form of text and branding, housing a vertically aligned Oppo logo. The cameras are slightly protruded which isn’t quite different from the trend today.

The Oppo K3 looks a lot like the Oppo Reno and, in fact, also shares a lot of common hardware on the inside as well.

On the front, there is a big screen, a small chin at the bottom, and that is all there is. No one but Apple has gotten rid of the chin yet although many, including Oppo themselves, are capable of making it much smaller than it is here. Another area where Oppo follows the trend is the glass build of the device. The back is multicolored, protected by a metallic rim.

There’s also a USB 2.0 Type C charging port, as well as a headphone jack. A dedicated mic also allows for built-in active noise cancellation. The fingerprint reader has been embedded under the display.

The screen on the front is an impressive, immersive, 6.5-inch AMOLED capacitive touchscreen. It has a resolution of 1080 pixels by 2340 pixels which means it packs in ~396 pixels per inch. The resolution of the Oppo K3 wallpapers is same as its display resolution. Despite the all screen design, Oppo only manages ~84.7% screen-to-body ratio which is still impressive but some OEMs manage more with a notch. The device has an aspect ratio of 19.5:9.

Below the screen, it packs in a Qualcomm Snapdragon 710 which is an octa-core processor. The CPU on the chip is paired with the Adreno 616 GPU. On the memory front, there are two variants with 6GB and 8GB of RAM. The 6GB RAM variant is available with 64GB of internal storage options whereas with the 8GB variant only provides a 128GB internal storage option. The storage cannot be expanded since there’s no microSD slot.

The battery in a non-removable 3765mAh Li-Po one and supports Oppo’s proprietary fast charging technology, VOOC Flash charge, at 20W.

The camera on the back is a 16 MP shooter with an f/1.7 aperture and PDAF support. It also supports HDR and panorama shots. The second camera is simply a 2MP, f2.4 depth sensor.

The device ships with Android 9.0 out of the box with ColorOS 6 built on top of it.

We have 5 Oppo K3 wallpapers that you can check out below. The images below are compressed JPEGs only meant for demonstration. We have packed the actual wallpapers into a single, easy-to-download zip file. You can download it from the link provided below.

The Oppo K3 wallpapers have a resolution same as the device’s display, i.e. 1080 pixels by 2340 pixels. Download the zip file from below.