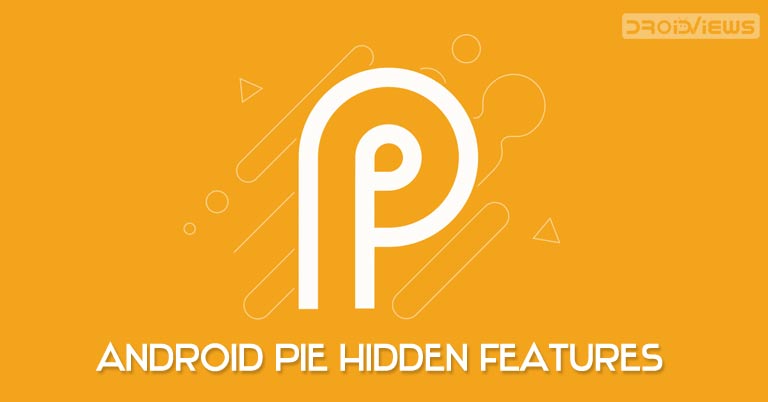 Google simply loves to hide features and easter eggs within its creations. Be it the Chrome browser or Search functionality, you could find a plethora of hidden features and tricks. But they aren’t the only ones. Unknown to many, there exist hidden feature flags in Android 9.0 Pie as well. These flags aren’t going to cause any drastic change in your devices, still, some tweaks and UI changes here and there are always welcome. Some of the flags even bring back the Android Oreo style features. Let’s now have a look at how to enable these flags on your device.

If you are using Chrome for long and are an avid reader here at DroidViews, you might probably know about Flags. You might call flags as experimental features that are hidden from normal users. Similar is the case here as well. These flags are buried deep inside the Developer Options, which in fact is itself hidden. Follow the below steps to enable the Developer Options and hence the feature flags on your Android 9.0 Pie devices: 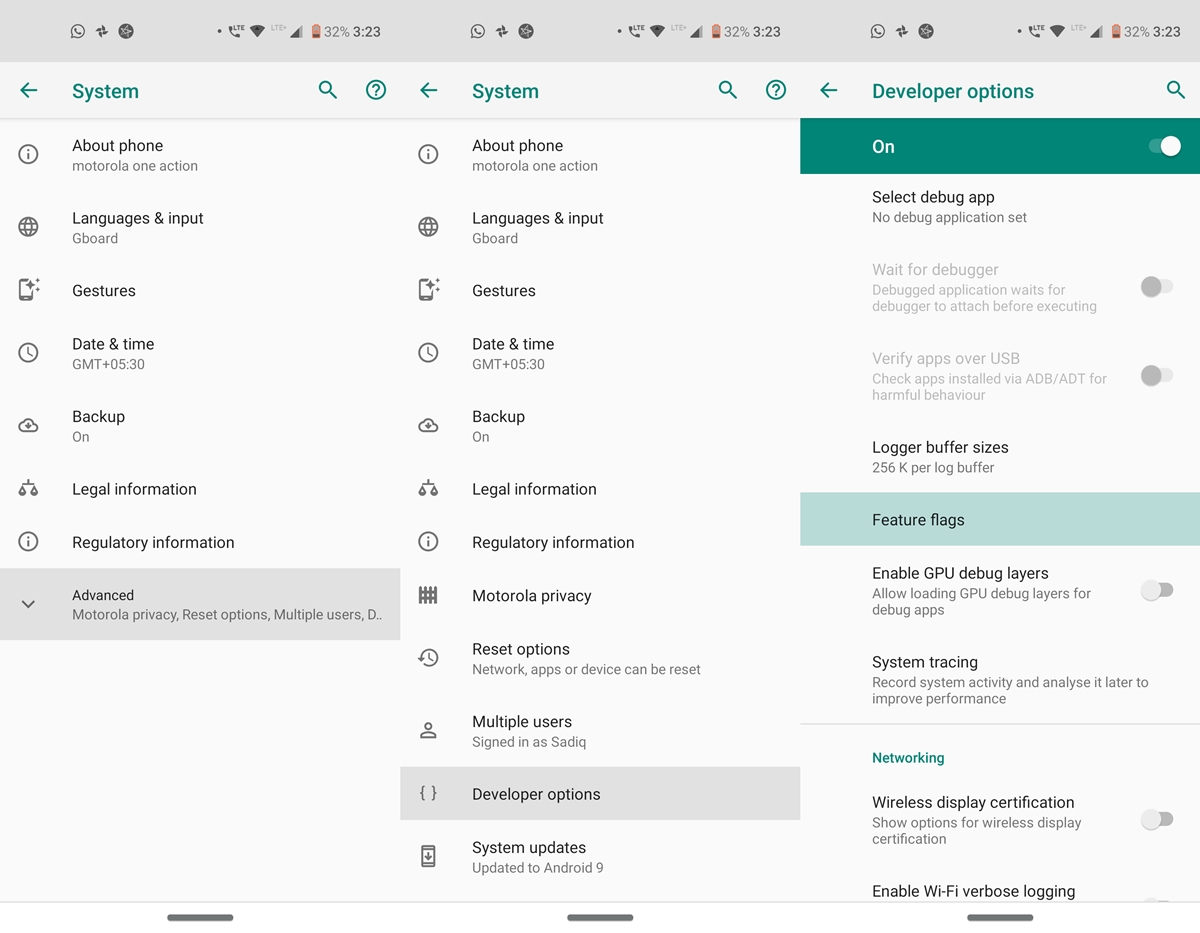 That’s it. Now you have enabled the Feature Flags on your Android 9.0 Pie devices. Let’s have a look at each of these flag’s functionality.

Before diving deep into their functionality, do note that the number of flags may vary in devices. This is because all of these feature flags were introduced during the beta testing phase of Android 9.0 Pie. And different OEM incorporated a varied number of flags onto their devices. With that being said, one or two flags might not be present in every Android device, like bluetooth_ hearing_aid, settings_battery_v2, etc. Moreover, these flags are defined in Boolean values, i.e. True and False, where True stands for the feature is enabled and False for disabled.

Set this feature flag in Android Pie to true and the About phone option moves to the top of the System menu. Moreover, you will now get your name at the top of the screen followed by all the other related information. If you keep it false, the option shifts to the bottom of the System menu. Moreover, your avatar will also no longer be there. Apart from that, only the basic information like Phone number, IMEI, etc. will be shown in the first place. All the other information will be moved over to the newly created Advanced section. 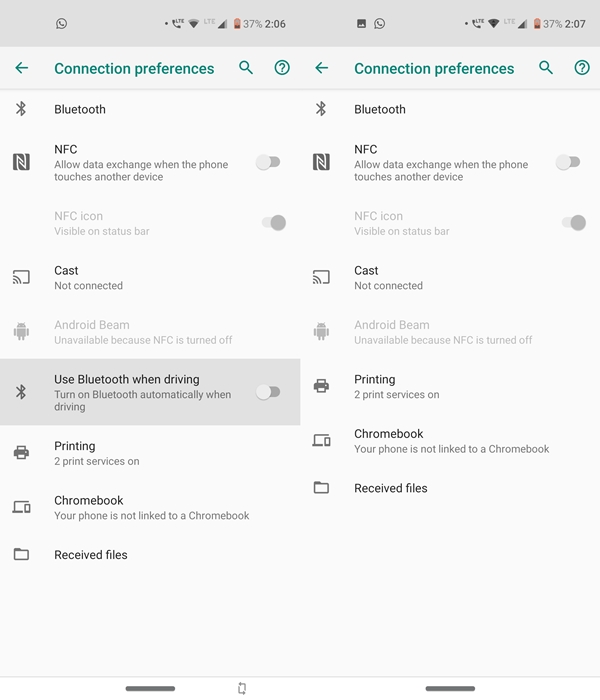 Tried enabling/disabling the flag, but there doesn’t seem to be any change to the Data usage option.

Similar to the above one, it also doesn’t seem to perform any activity, whether enabled or disabled.

This feature flag doesn’t seem to have any visible change to any of the Android Pie settings, whether said to true or false. Neither does it affect the System UI demo mode. 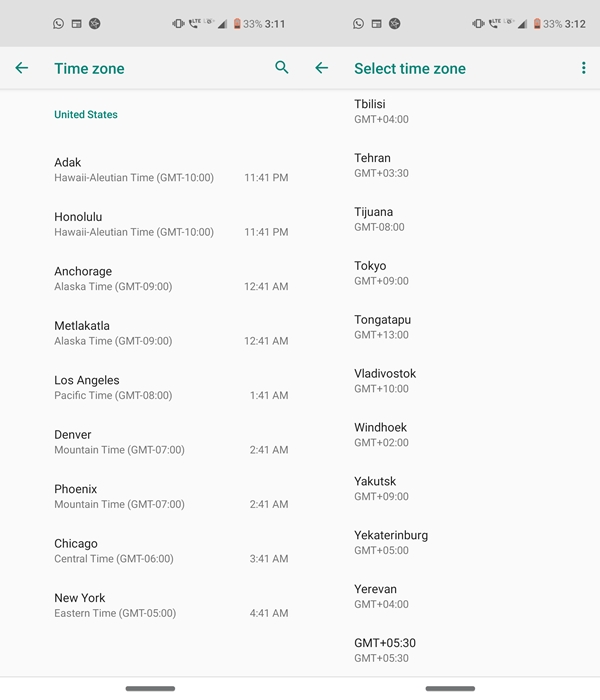 If you set it to true, and go to Settings > System > Date & time and turn off the Automatic time zone, then tap on Select time zone and you will be presented with a much detailed view. Disabling this feature flag in Android Pie will revert to the UI that was present in Android Oreo, i.e. a simple and less detailed information.

This feature flag was available in the beta stages of Android Pie and is since missing from most of the devices running the stable build of Pie. However, if you have it, try turning it off and you will have a much detailed Battery stats and usage, similar to the one provided in Android Oreo. However, if you set it to true, less information on the Battery settings page will then be provided.

When enabled, you will able to connect a hearing aid that has Bluetooth capability to your Android device. On setting it to false, the device will stop the support for the Bluetooth hearing aid. As mentioned before, this feature flag isn’t available on most of the Android 9.0 Pie devices.

If this flag is set to false, then you will get the Battery settings page as it is by default. When you enable this feature flag on Android Pie devices, you will get a list of various system apps and its battery usage since the last full charge. This flag only works in combination with the settings_battery_v2 flag. But the absence of the latter feature flag from most of the Android Pie devices has made the former unusable.

So these were the various hidden feature flags in Android 9.0 Pie devices. Do let us know in the comments which one was your top pick.

Read Next: How to Speed Up Lagging Android Devices 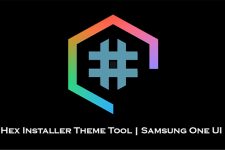