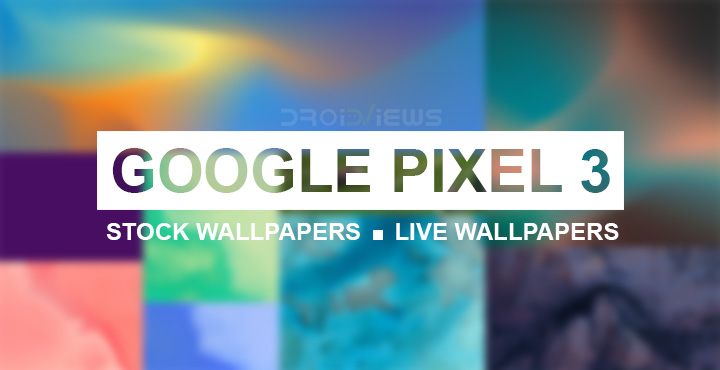 The Google Pixel 3 XL is perhaps the most leaked smartphone in history. The device just can’t have the internet stop talking about it. Images of the Pixel 3 XL have been taken on trains, in parks, by taxi drivers, and it’s like Google doesn’t even want to keep it a secret.

Many of us are very disappointed with the huge notch on the Pixel 3 XL though. I’m so disappointed that I wasn’t even excited about the new Pixel smartphones. That is until the internet started speculating that the notch might just a prank by Google. While I hope that’s true, here’s another Pixel 2 Leak, and this one’s exciting.

These wallpapers were uploaded by Twitter user Ishan Agarwal. If you were waiting for the new Pixel devices for some new wallpapers, now you don’t have to. This might kill the excitement for the Pixel 3 even more now, for some people. But there are so many brilliantly designed wallpapers here that you could switch to a new one every day and you’d still have a few wallpapers to try by the time the Pixel 3 is announced.

In case you’ve been living under a rock or have just forgotten, the Pixel 3 is rumored to ship with the Snapdragon 845 Soc which is the best from Qualcomm as of now. It’ll feature a QuadHD+ display meaning a display with a resolution of 2,960×1,440 pixels. It is also rumored to support wireless charging which has been missing from previous Google Pixel devices, and it’s not hard to see why. Apple did it with the last iPhone finally. The device is also expected to feature 4GB of RAM which is a little low for 2018. Considering the device is straight from Google and should be pretty well optimized 4GB of RAM should be more than enough though.

The Pixel 3 Live Wallpapers can be installed as an APK that you can download using the link below. To install the APK you must enable Unknown sources in Settings > Security. If you’re running Android Oreo or above, you’ll have to grant the permission to install unknown apps to your browser or file manager. You will be redirected to the required settings page when you open the APK file using the package installer. Many of the stock wallpapers have been made into Live Wallpapers, or it may be the other way around. In any case, it just means more wallpapers for us to enjoy.

Before you download and install the APK, make sure you have the Google Wallpapers app installed on your device. The Live Wallpapers require the app in order to work. We can confirm that all the wallpapers work perfectly on the OnePlus 6 running on Android Pie. It should also work on any Android device running Android 9.0 Pie or above.

The last time around, we shared a leaked Pixel 3 Wallpaper which was seen in a leaked render. Strangely, that wallpaper is absent from the newly leaked Pixel 3 wallpaper pack. The new pack contains a total of 28 stock wallpapers from Google Pixel 3. Most of the wallpapers have a full HD resolution which is 1080 x 1920 pixels while some have a resolution of 2880 x 2880 px.

We’ve uploaded all the wallpapers below in full size so you can not only have a look but also download them individually as per your liking.

You must be familiar with the following wallpapers. They are shown in all Google Pixel 3 and 3 XL’s promos. Download them from below.

If you want to download the entire wallpaper pack, you can do so using the link provided below. The live wallpaper is also included in the pack.