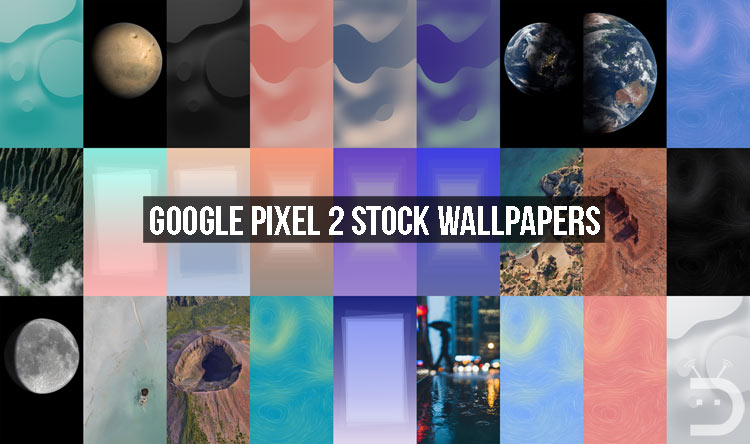 We have got 56 Google Pixel 2 stock wallpapers for you in Full HD and QHD resolutions. You can download the images individually or as a zip.

Google’s flagship new smartphones are official now. Mountain View announced the Google Pixel 2 and Pixel 2 XL on October 4th along with a number of other hardware products. These include new Google Home devices, Mini and Max and a new Chromebook called Pixelbook. But obviously, the most exciting announcements were the Pixel 2 and Pixel 2 XL which aren’t as identical this time around as they were last year.

There isn’t a whole lot different between the two devices this time either. The only major difference is in the screen size and a number of bezels. The Pixel 2 XL has a lot more screen and a lot fewer bezels. But a good display needs a good wallpaper and we have those with us right here. You can download the Google Pixel 2 / Pixel 2 XL Stock Wallpapers down below.

In case you haven’t already heard a lot about the two smartphones, here are some things you might want to know.

The Google Pixel 2 XL features a larger 6-inch display with a QHD+ resolution (that’s 1440 x 2880) and it’s taller 18:9 aspect ratio. It uses a P-OLED display instead of a traditional OLED. The smaller Pixel 2 has a 5-inch 1080p display which isn’t very bad. Both the displays also come equipped with 3D Corning Gorilla Glass 5. The Pixel 2 XL, owing to it’s larger size has a larger 3520mAh battery while the smaller Pixel 2 has a 2700mAh battery.

The displays are both fine and well protected. What’s more concerning probably is the lack of a headphone jack on both the smartphones.

Both the new Pixels are powered by the same Qualcomm Snapdragon 835 chip paired with 4 GB of RAM. Both the flagships from Google are available in 64GB and 128GB variants. The smartphones are also identical when it comes to their photography prowess. Both the phones house a 12.2-megapixel rear camera with f/1.8 aperture and optical and electronic image stabilization. The front-facing 8-megapixel camera has an aperture of f/2.4.

Going by the not so extensive record of the Pixel line, the cameras should be one of the best if not the best like last year’s devices. The newer Pixel phones feature a dual Pixel technology instead of a dual camera setup. This means that every pixel captures double the information and Google loves information. Using its software prowess, Google manages to compete with all the dual camera smartphones out there. Google gave the Pixel 2 to DXO for early testing, and the phone apparently got a record-setting score of 98. The next best score is 94 of the iPhone 8 Plus.

But the jury is still out on whether these cameras can retain the crown of the best smartphone cameras.

As was rumored for a while even before the official launch, both phones feature an Active Edge technology similar to that of the HTC U11. Google hasn’t dramatically made Edge Sense more useful but that is simply an opinion that others might not agree with. TL;DR, you can squeeze the phones to call on Google Assistant.

Oh and this time, the phones by Google feature an IP67 rating which isn’t exactly water resistant but it is still something.

Continuing the trend from last year, this year’s Pixel phones aren’t cheap either. The Pixel 2 is priced at $649 for 64GB of storage and $749 for 128GB. It comes in three color variants – white, black, and kinda blue. The Pixel 2 XL will be offered in just two colors – black and white. The white one has a few nice touches though, like a black glass on the back and an orange home button. Depending on whether you get the 64GB variant or the 128GB variant, the Pixel 2 XL will cost you $849 and $949 respectively.

The wallpaper below was leaked before the new Google phones were announced in a render. The image has been re-scaled to match the Pixel 2 XL’s 18:9 QHD+ display.

Just added 27 more QHD wallpapers from the Google Pixel 2 and Pixel 2 XL. You can download the wallpapers individually or grab them all in a zip package from the end of this article.