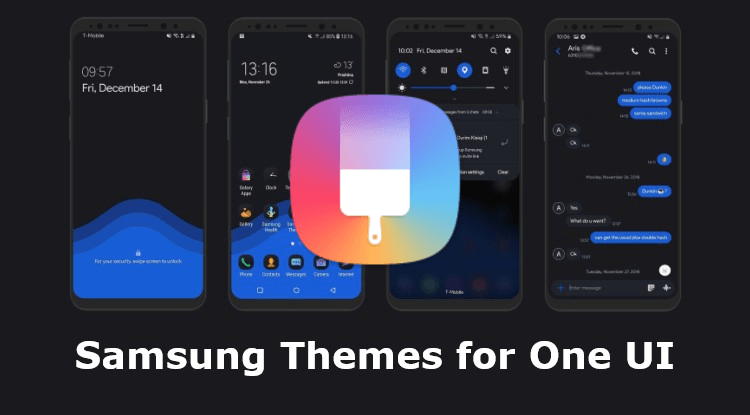 Samsung has recently opened the One UI Beta Program to the public, allowing certain devices to preview the Android Pie update. Just as you would expect from beta firmware, there was no support for themes, in order to avoid stability issues. However, One UI is now approaching the final release, and the latest Theme Store update finally works with Android Pie. Moreover, there are some working themes you can try right now. Here’s how to download the latest version of Samsung Themes APK for One UI Beta!

What is Samsung One UI?

One UI is the successor to Samsung Experience, a custom version of Android which the company uses for its Galaxy devices. The new interface is based on Android Pie 9.0 but takes a completely different approach. In fact, considering that smartphone displays are getting bigger, reaching elements at the top of the screen often requires two hands. In order to solve this issue, Samsung has moved the most important interactive elements to the bottom of the screen, where they’re easier to access.

Samsung has launched the One UI Beta Program a few weeks ago, so it’s already possible to try the latest update on selected devices. At the moment, the official beta is available for the Galaxy S9, S9+, and Note 9, which will also be the first in line for the final release. We have published an installation tutorial, so we recommend checking it out if you’re interested. Additionally, below you’ll find our review, which allows you to get an idea of what’s new.

What is Samsung Themes?

Samsung Themes is the favorite theme engine of most Galaxy users, given its simplicity and ease of use. While there are many great alternatives, this one allows you to browse an endless library and apply any theme within seconds. We’ve been seeing Samsung Themes on Galaxy devices for a few years, and there’s now a huge community supporting it.

When you access the Theme Store, you’ll find 4 main categories: Wallpapers, Themes, Icons, and AODs. When you apply a theme, it generally modifies all other elements along with the looks on the interface. However, you can also mix several elements or pick your own wallpapers, if you want. Moreover, if you like live wallpapers, you’ll find an awesome collection of them for both the lockscreen and homescreen. Let’s see how you can get the working version of Samsung Themes for One UI Beta!

The most recent version of Samsung Themes for One UI Beta comes pre-installed with the latest build, so some of you may already have it. However, in case you haven’t installed the update yet, or you simply prefer to stay with an older beta release, you can still install it manually. In order to do this, you simply need to download the APK and install it like a regular update. Depending on the browser you use, you may need to allow unknown sources before proceeding.

Clicking on this link will bring you directly to the APK Mirror website. For those who don’t know, this portal is managed by the Android Police team so it can be considered a reliable source. Moreover, they provide all the digital signatures so you can verify the authenticity by yourself. Anyways, the version of Samsung Themes for One UI Beta that you need to download is 4.2.28.81212, but any newer one will also work. Once you install it, you can launch the Theme Store through Samsung Home or device settings.

Since we’re talking about a very recent release, there will be a lot of themes coming out during the next weeks. We have managed to collect some of the most interesting ones we could find so you can check them out right away. Some of them are paid and others are free, but keep in mind that Samsung has changed the policy for the free themes. As a result, you can’t use them for longer than 14 days. The goal is encouraging people to try out new ones more often, which also benefits the developers. Anyways, here’s our list of the best Samsung Themes for One UI Beta!

Update: It looks like Samsung has removed the 14 days limit for free themes. While this should be already effective, Samsung hasn’t communicated anything about it, so we don’t know if it’s permanent.