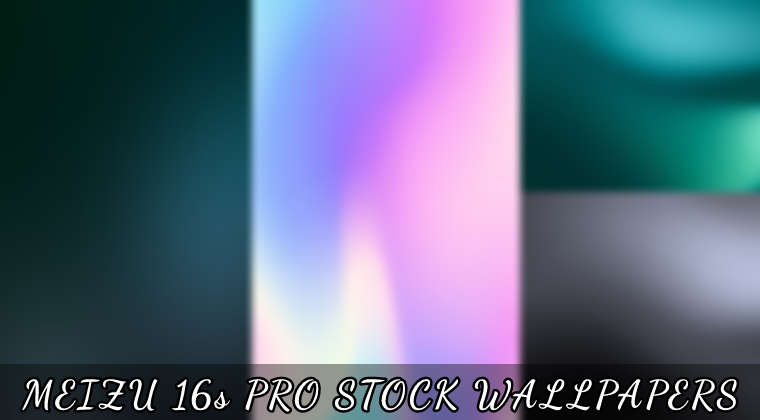 If there’s one smartphone maker that outs devices with symmetrical display bezels, that’s Meizu. Now don’t tell us that you do not know the Chinese smartphone company. Meizu has outed a few decent and innovative devices in the past. Speaking of which, today, you can have 4 Full HD+ (1080 x 2232 px) Meizu 16s Pro wallpapers in 18.5:9 aspect ratio. Without further ado, as usual, let’s get to the specifications of the Meizu 16s Pro before downloading the wallpapers.

The Meizu 16s Pro was announced late last month. It is a refreshed Meizu 16s that was announced nack in April this year. The main improvements although are the SoC and camera. Having said that, you can also download the Meizu 16s stock wallpapers.

Coming to the display, a gorgeous Super AMOLED display that is of the Full HD+ variety (1080 X 2232) touting an aspect ratio of 18.5:9 (same goes for the stock wallpapers). With that said, the panel features a 160Hz touch sample rate, meaning 160Hz is the frequency at which the touch screen tracks the movement of a finger. This helps the phone to respond to touch inputs such as taps, swipes and gestures much faster than usual for better user experience.

Going by the trend nowadays, the Meizu 16s Pro is equipped with an in-display fingerprint reader for authentication purposes (we hope it isn’t the unreliable ultrasonic sensor like on the Samsung Galaxy S10).

The battery capacity is a not so fine 3600mAh which is embedded in the Meizu 16s Pro. However, to make up for the lack of battery capacity, Meizu’s mCharge is onboard. “mCharge” is the company’s fast charging technology (24W).

As far as connectivity is concerned, the Meizu 16s Pro comes with Dual-band Wi-Fi a/b/g/n/ac, Bluetooth 5.0 LE along with GPS for navigation and location services.  However, an audio jack is nowhere to be seen on the Meizu 16s Pro which will definitely disappoint audiophiles.

Pricing for the Meizu 16s Pro starts from $376 for the base model all the way up to $460 for the maxed out variant. The Meizu 16s Pro is already available for purchase in China and will eventually trickle down to other markets soon. Colors available are Green, Black, Gradient, and White.

The wallpapers of the Meizu 16s look and feel minimal, vibrant and simple. Again we have got 4 Full HD+ wallpapers in 1080 x 2232 pixels resolution. And again, the aspect ratio of the wallpapers is 18.5:9.

Download the Meizu 16s Pro wallpapers via the Google Drive link or check out our gallery below.