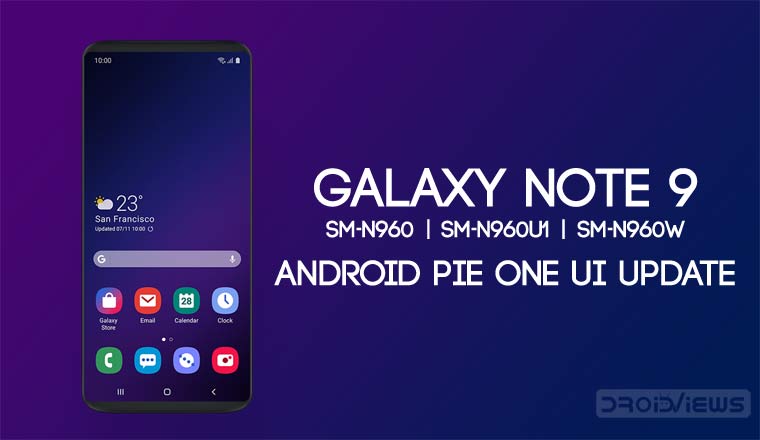 Samsung Galaxy Note 9 Android Pie update with build version N960USQU1CSA7 is now available. Below is a detailed tutorial with steps to update Galaxy Note 9 from Android Oreo to Android Pie (One UI). You can install One UI update on Snapdragon Galaxy Note 9 with model numbers SM-N960, SM-N960U1, and SM-N960W.

For those not in the loop, Samsung announced a brand new interface design for their smartphones which will be coming to all devices that receive the Android Pie update. The new interface has been designed keeping in mind the super tall screen aspect ratio of the modern smartphone. Essentially, the interactive parts of an app are towards the bottom where your fingers can easily reach them. The upper half of the screen, Samsung says, should be the viewing area where you can see information but don’t have to interact with it. You can now upgrade Samsung’s currently latest flagship, the Samsung Galaxy Note 9 from Android Oreo to Android Pie based One UI.

Although the firmware you’ll be installing is official, it isn’t officially available for the Galaxy Note 9 yet. Samsung is yet to roll out the Android Pie update which means they’re probably working on ironing out something. So keep in mind that you may face minor bugs here and there although nothing major. The beta firmware available is an AT&T firmware which means it does come pre-loaded with a handful AT&T bloat apps. Moreover, the firmware shared is only meant to be installed on the Galaxy Note 9 devices with model number SM-N960, SM-N960U1, or SM-N960W. Trying to install it on other variants might not end well.

The process to upgrade that is described below will wipe all your data so make sure you have a backup of everything that’s important.

Don't Miss 10 Samsung One UI Features You Should Know About

Now follow the steps given below to enjoy Samsung One UI Android Pie experience on your Galaxy Note 9.

Sideload N960USQS1ARJA-U1CSA7.zip via Recovery or ADB

Your phone will then be flashed with the N960USQS1ARJA-U1CSA7 firmware and reboot into Android 9.0 Pie (One UI) automatically.