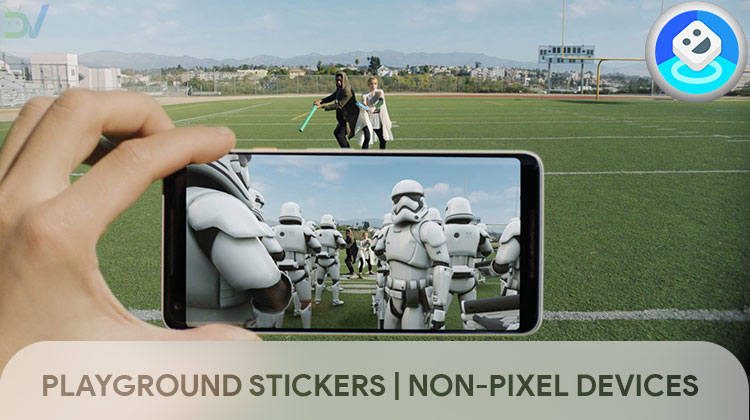 Google announced AR stickers last fall but a lot has changed since then, including its name. On October 9 during the Pixel 3 launch, Google also announced a rebranding of AR Stickers as Playground. Playground exists as a special mode in the Google Pixel 3 camera app. Like a lot of features, the Playground is also a Pixel exclusive, or it was until it got ported. Thanks to XDA Senior Member Arnova8G2, who is also behind the development of Google Camera port, Playground can be installed on all ARCore supported devices running Android Pie.

Google Playground is not simply a rebranding, however, but also an improvement. Playground suggests new AR animations to fit the scene you’re in and it works from both the front and rear cameras. Google has also introduced four new packs of AR animations called “Playmoji”. These are very much like the lenses and filters popularized by Snapchat that have since been adopted by a number of social networking and smartphone camera apps. A big difference lies in the fact that Playgrounds stickers are entirely 3D and have a much smarter sense of spatial and object recognition. You can thank Google’s advances in artificial intelligence for that.

The ported app only runs on ARCore compatible Android devices running Android 9.0 Pie for now, as we’ve mentioned. A list of all supported ARCore devices can be found on the official page. The list of supported smartphones is pretty extensive and more and more are being added every month. Google has been working closely with OEM partners to ensure compatibility and even if your device doesn’t support ARCore right now, it possibly could with an update.

For most users, the limiting factor would probably be the availability of Android Pie. You will probably have a better idea about the update situation with your device’s OEM. If we know anything from past history it is that most Android devices will never see the Android Pie update. The good thing is you only need Android Pie, it doesn’t matter if it’s an official firmware.

Even if you do have an ARCore compatible device running Android 9.0 Pie, you’ll still need a working Google Camera port for your device in order to use Playground. As we mentioned before, Playground is simply a special mode in the Google Camera app. That is currently the only way to access it. We have shared quite a few Google Camera ports for many devices including the OnePlus 6, OnePlus 6T, Razer phone 2, Poco F1, Mi 8, Mi Mix 2s, Mi A1, etc.

In order to use Playground, first of all, you’ll need the latest ARCore by Google which is available on the Google Play Store. You can follow the Play Store link provided below or download the latest Playground APK from APKMirror.

When ARCore is installed, download the ported Playground APK by Arnova8G2 from the link below.

Once installed, you can find the Playground mode under the More tab in the Google Camera app. At the first launch, a simple guide walks you through the process of interacting with the stickers. You can move them around as well as resize them. Under the Playmoji or Stickers tabs, you can also find options to install any new packs that may become available in the future. In this mode, it isn’t obviously clear that you can also record video but you can. To do that you simply have to press and hold the camera button for as long as you want to keep recording.