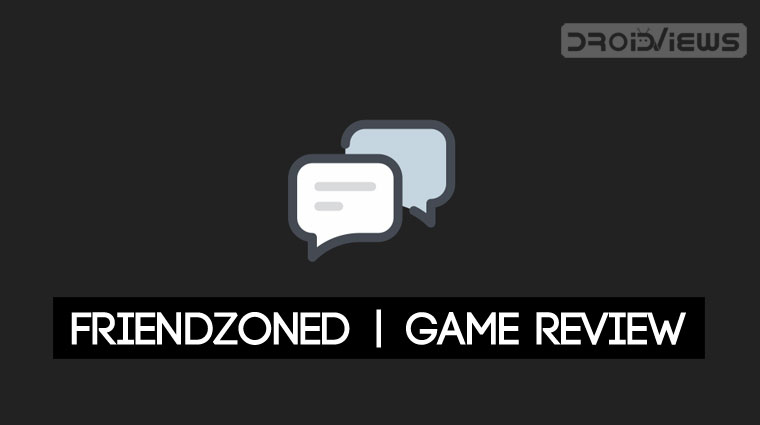 Friendzoned is a small chat-based text game and this is a Friendzoned game review. Spoiler alert, it’s definitely worth a try.

Any old time nerds will remember how computer games used to be. Not everything was about how cool it looked. Many times there wasn’t even much to look at other than text. Although most games today are “video” games, many great text-based games are still around. These have even inspired a new category of chat-based text games like Friendzoned. Are they worth playing in 2019 though? We can’t say about others but our Freindzoned game review will tell you whether Friendzoned is for you.

Developed by PurpleTear, Friendzoned is a small chat-based text game that weighs around 13MB in size, as of the current version which is 5.3.0. It’s not quite available worldwide yet. For now, it’s available in a total of 36 countries including Japan, France, German countries and English countries. On its Play Store page, the game has earned a 4.7 rating out of 5 with over 50k reviews and 900k downloads.

Without spoiling much of the story, you meet a girl. You decide to add her as a friend but when your discussions deepen and you feel like this is leading to somewhere, she’s kidnapped. All of that happens while you’re texting her, of course. The story takes different interesting turns from there. Your job though is to get through all of it without getting Friendzoned.

It’s a chat based text game so you can’t really expect a lot out of it other than hoping that the writing is good. Unlike other games, you don’t have much in the way of graphics design but there definitely is some visual design to the game. It’s designed to look like a chat app and it sure does look like it. Someone who sees you playing the game can easily assume you’re chatting with someone.

When you start the game, just hit Play and you’re already playing it. The story unfolds in multiple chapters which is great because it reminds you that you can now take a break. It is surprisingly addictive once you start and you don’t have people around to distract you from it. That’s because of the way the narrative moves forward.

There are multiple endings depending on the choices you make throughout the storyline. This makes the game playable multiple times if you’re not satisfied with how things end. I, for instance, caused a girl to commit suicide, I think. I guess being honest is not always the best idea.

Moreover, even though it is just a text-based game, it does try to provide a more immersive experience. The backgrounds on the chat app change at times, and there are sounds and even music that suit the situation.

For a text-based game, Friendzoned is quite immersive. I actually played through an entire storyline which I wasn’t expecting. So keeping that in mind, it’s not perfect, because nothing really is. If I had to nitpick, I was kind of put off by the fact that real, off texting events, are also happening inside this chat app. Say, when you meet a certain girl at a bus stop, and she says hi, it comes in like a text message. There’s no visual distinction between when it’s a chat and real face to face talk.

I haven’t played through multiple times but the one playthrough I had, I felt was pretty short. Just when I was about to get invested in the story it ends with someone’s suicide. Technically it’s not the end of the story though, just the end of the game. It leaves you at a cliffhanger. It’s a great strategy to keep players wait and want the second installment. So no complaints about that but I feel like it just needs to be mentioned.

Apart from that, there’s not a lot to complain. Oh, you do have to watch video ads before new chapters. But if you don’t like them enough you can always make a one-time payment and get rid of them. Not to mention, you’ll also be helping the developers and writers. It’s definitely a game worth trying if you’re someone who doesn’t care about the visual elements as much and if all you want is an engaging story.

I have said enough in our Friendzoned game review and now waiting for the next iteration of the game named Friendzoned 2 that’s is due to come on this Sunday! Give this chat-based game a try and let us know if you like it or not.