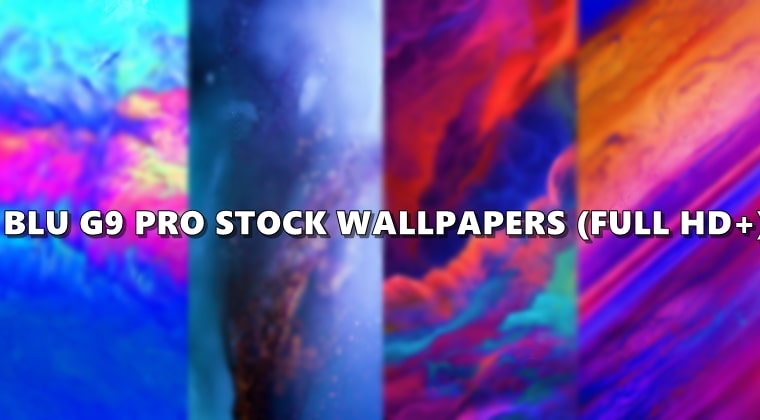 There is no shortage of smartphones when it comes to mid-range segments. With Realme, Oppo, and Xiaomi already stacking up plenty of devices, there seems to be quite a competition over at the top. Igniting this competition further is a device from a less-heard OEM. In this guide, we will be having a look at the latest offering from the OEM known as Blu. Dubbed as the G9 Pro, let’s see what it has to offer. But before that, here is a collection of Blu G9 Pro stock wallpapers that you should definitely check it out.

In all, there are 11 wallpapers, all in Full HD+ quality. Furthermore, these Blu G9 Pro stock wallpapers are of 1080 x 2340 pixel resolution. You could directly download all of them from the below section. Then we will be having a look at its specification sheet. Also, since the festive season is around the corner, have a look at our huge collection of 50+ New Year 2020 wallpapers.

The latest offering from Blu has plenty to offer. Providing tons of features at an affordable price, one cannot help but have praise for this device. But what makes it so popular? Well, we will be having a look at that as well. But before that, here are the Blu G9 Pro stock wallpapers for you to download. Apart from that, don’t forget to check out Oppo Reno 3 Pro stock wallpapers.

As mentioned before, there are, in total, 11 wallpapers of 1080 x 2340 resolution. All of them are having an aspect ratio of 19.5:9. The Blu G9 Pro stock wallpapers we have provided below in the gallery are highly compressed and just for previewing purposes. Hence they aren’t recommended for the purpose of setting it as your device wallpaper. To download them, please refer to the Google Drive link that follows this section. On that note, here are some of the Google Drive tips that you should definitely be aware of.

Here are all the 11 Blu G9 Pro stock wallpapers for you to download.

Apart from these, there are some Oppo stock wallpapers that you should definitely have a look at.

Although not currently among the best mobile manufacturer, but definitely it shouldn’t be counted out. The latest device from Blu further solidifies the claim that it is indeed a smartphone worth deserving your attention. With a pretty solid build, large display and a triple rear camera capable of clicking nice shots, it has made sure that it ticks all the boxes. And supporting all this is a huge battery that supports quick charge as well. Now that you have downloaded the Blu G9 Pro wallpapers and got somewhat of an idea about this device, let’s dive deep into its specification. Also, check out the Vivo S5 stock wallpapers.

Supporting a 6.3″ display screen, reading, browsing or streaming videos will be a streamlined process. Furthermore, with a ~82.6% screen-to-body ratio, 1080 x 2340 pixels and a 19.5:9 aspect ratio, display definitely manages to hold on to the requirements of today’s smartphones. even the Blu G9 Pro stock wallpapers that we provided above are of the same resolution and aspect ratio. Having a Mediatek MT6771 chipset, it is supported by an octa-core CPU and a Mali-G72 MP3 GPU.

Coming to the software front, the device runs atop Android 9.0 Pie. It doesn’t have any customized OS as such but comes pre-installed with a few sets of apps. The device also manages to power-pack a decent 4000mAH battery. The support for 18W Quick Charge definitely proves to be the icing on the cake. Likewise, here are 6 tips to charge your Android device faster. One could definitely say that not only the Blu G9 Pro stock wallpapers but its hardware also leaves one impressed.

Belonging to the mid-segment hasn’t stopped the device from packing in rich features. This is also evident from the fact that it manages to provides a sufficient 128GB of internal storage. Considering the fact that most users now opt for cloud storage like Google Photos, on which you could store unlimited Blu G9 Pro and other devices wallpapers, memory shouldn’t be much of an issue. However, if even that’s not enough, well you could further expand it via an external SD Card. As far as the RAM is concerned, it has a more than decent 4GB of Random Access Memory.

Coming to the camera front, the device holds a triple rear camera and a single front-facing selfie camera. The rear camera’s setup includes a 16 MP, f/1.8, a 20 MP, f/1.8, and a 5 MP, f/2.2 lens. They are capable of recording videos at [email protected] Apart from that, the rear camera also supports LED flash, HDR and a Panorama view. This shouldn’t come as a surprise considering the fact that most of the devices at this segment holds these features as well. If we talk about the selfie camera, it has a 24 MP, f/2.0 lens capable of recording videos at [email protected] All in all, these camera specs, similar to the Blu G9 Pro wallpapers, definitely looks pretty solid, at least on paper.