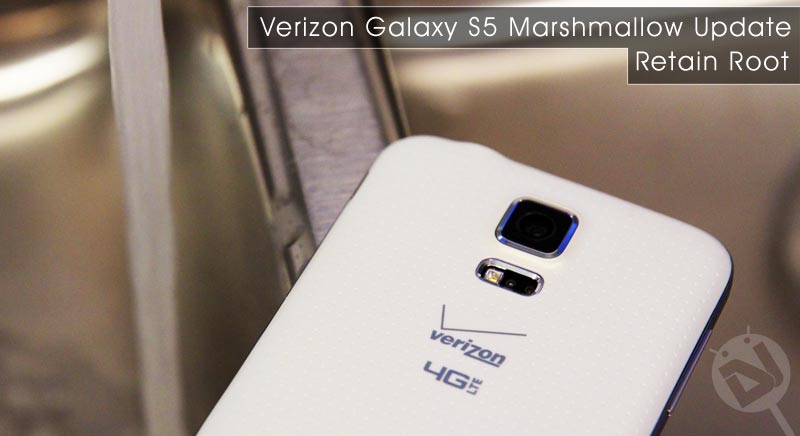 Samsung started rolling out the Android 6.0.1 Marshmallow update for Galaxy S5 shortly after the release of its current flagship the Galaxy S7 and S7 Edge. The firmware update began to hit the international unlocked variant of the device as early as March 2016. However, as it usually happens, the carrier-branded devices, especially the ones from US operators, receive the latest software updates after many weeks and, in some cases, after months.

Since carrier operators like AT&T and Verizon are very strict about stopping their users from rooting their devices, many users ignore new software updates because they don’t want to lose root. If you remember, we posted a detailed tutorial on updating the Verizon Galaxy S5 to Lollipop and retaining root.

If you own the Galaxy S5 SM-G900V running Android Lollipop and have been enjoying root privilege on it, you must be ignoring the Marshmallow. If that is the case, here’s is a great news. Your wait is finally over because XDA member muniz_ri  has come out a way to get your Verizon Galaxy S5 updated to Android 6.0.1 Marshmallow and retain root access after doing so.

The talented developer has repackaged the stock firmware as a deodexed and debloated ROM that can easily be flashed using Chainfire’s celebrated app FlashFire. You must have understood now that the method described below requires a rooted Galaxy S5 SM-G900V.

Anyway, if you unaware of the changes and improvements Marshmallow has brought over Lollipop, below is a small list of some major ones:

How to Restore Verizon Galaxy S5 (SM-G900V) to Stock

About the ROM: Must Read

Now a few things about the ROMs provided below:

I have double-checked the steps in the tutorial, I still can’t guarantee that it’s risk-proof. In most cases, it’s some mistake on the part of the users that later end up with sad faces. follow the guide at your own responsibility. Good luck!

Please note that while going through the FlashFire steps, the screen of your phone might turn black for a while flashing the system partition. Don’t panic and be patient for some time. After flashing the bootloader file in Odin, your device will halt at the Verizon splash screen for a couple of minutes. The halt duration might extend to 10 to 15 minutes if you have flashed the deodexed and debloated version of the ROM.

Once your Galaxy S5 gets past the splash screen, you’ll be able to use your phone and enjoy Marshmallow with root privilege. Should you have any issues after going through the steps given in the tutorial, or you need any help, feel free to drop us a comment below.