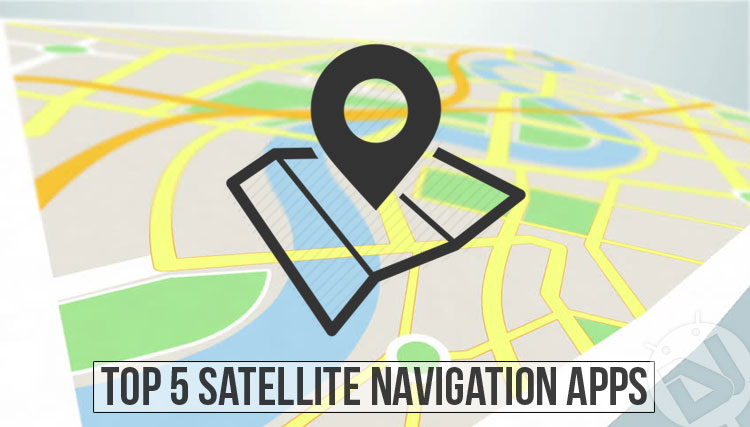 Having tested dozens of good navigation apps, we have shortlisted 5 best Satellite Navigation apps for Android devices you should try.

GPS receivers have been built on mobile platforms for many years. The quality and capabilities of these receivers have been getting better and better, with current devices offering full support for GLONASS, GNSS, and BEIDOU satellite networks. A-GPS technology, designed to improve time-to-first-fix of GPS satellite systems, is also supported out of the box by most Android-based devices.

By design, Android does a great job in abstracting any hardware differences between devices from the application framework. This enables application developers to concentrate their efforts on new and exciting features. Therefore, great applications can be produced. This holds true for GPS navigation applications too. If a device comes with a capable satellite data receiver, it can easily be turned into a feature complete satellite navigator, on some cases with features that are only offered by high-end commercial satellite navigation products.

Following is a list of Satellite Navigation applications that we believe are the best in their field on Android Operating System: 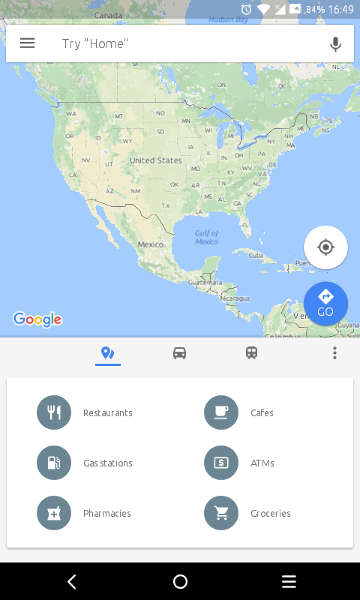 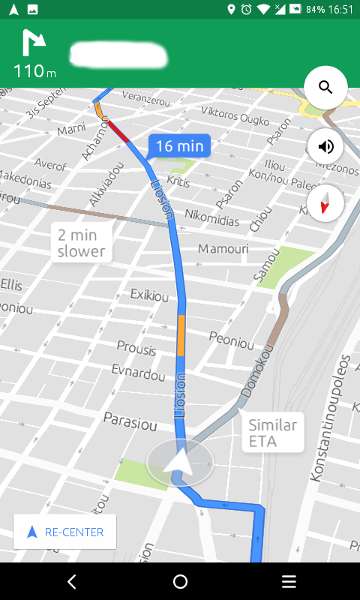 Everyone using Android and Google Services must have heard of Google Maps. It’s probably the best free satellite navigation app. Google Maps started as a desktop application by Where 2 Technologies. After acquiring it in 2004, Google has transformed it into a web application and API. With the introduction of the Android Operating System, a special application was designed for the Google Maps service.

The application offers turn by turn navigation, public transport information, and support for Google Street View service. Recent versions (after 2014), allow saving parts (limited area) of the map on the device for offline use. It is built on Google Services API, which means that it cooperates well with other Google Services like Google Search for Points of Interest (POI) and Google Traffic for real-time information about traffic conditions.

Google Maps application is coming pre-installed on most Android devices and has actually been awarded as the most used application on Android in 2013. For the best experience, this application should be used while connected to the internet, as it is designed around web technologies. 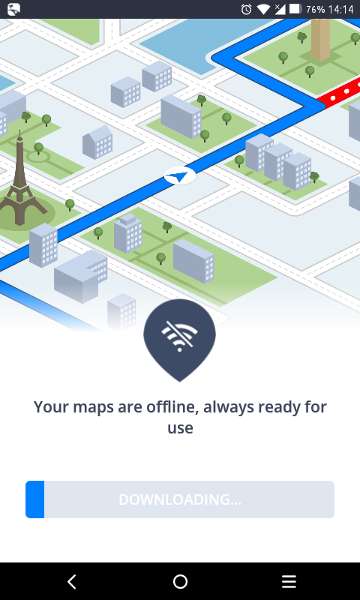 Sygic Navigator allows importing POIs in .rupi and .upi file format and a special POI converter application for Windows is available through the company’s site. This application has a price tag for the full experience, different license plans are available depending on region and features. Some add-ons are available too. In 2015, Sygic reached the milestone of 100 million downloads of its navigation application. 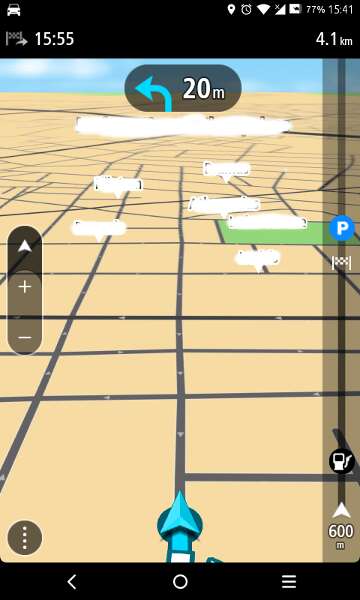 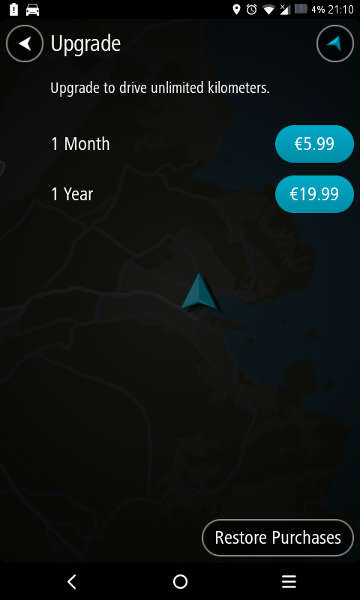 TomTom is a global leader in satellite navigation products. It offers a wide range of products, covering all the different usage scenarios. Having a giant as TomTom turn into Android application development demonstrates that Android is gaining ground in the field of satellite navigation. This application is created for use while driving. It features the company’s detailed and frequently updated maps and provides information about gas stations, parking lots, and other POIs. It integrates with TomTom’s Traffic & Safety Cameras Service for real-time notifications.

Furthermore, it allows the user to sync their Android device data through TomTom MyDrive and access them on all of their devices. GPX files can be imported through MyDrive. Maps are stored on the device storage, so the application can be used offline.
TomTom Go Mobile offers free 50 miles (75km) of navigation per month. The user can purchase an unlimited distance monthly or annual plan for 5.99 and 19.99 euros respectively. 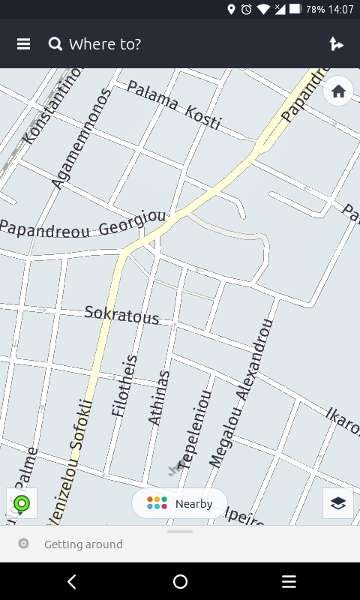 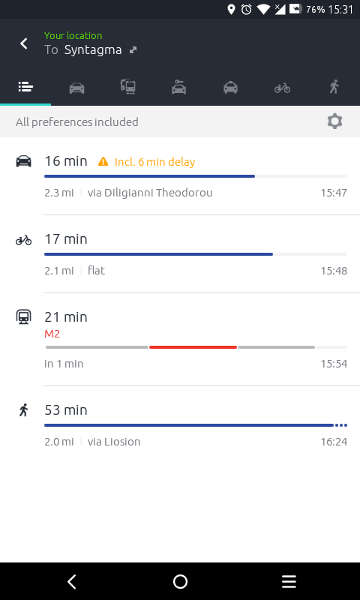 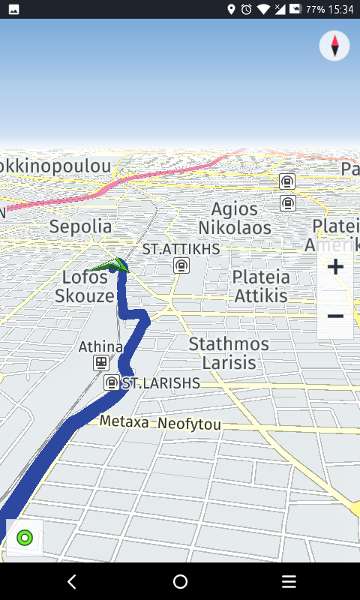 You may also like: How to See All Purchased Apps in Google Play Store

Here WeGO was originally developed by Nokia (and known as Nokia Maps on some platforms). Since 2014, it is available as an Android application. It features turn-by-turn navigation and also pedestrian and bicycle navigation modes. Therefore, the application can calculate a different route based on the way the user travels, taking advantage of any available pedestrian and bicycle tracks.

Moreover, real-time traffic notifications are available, including reversible lane traffic notifications across USA and Europe. Features like POI and services come through providers like Wikipedia, TripAdvisor, and others. Users can download and store maps for offline use. Maps updates are available every two to three months. There is some partial support for street views available. Lastly, users can update HERE maps using a separate application called HERE Map Creator.

HERE WeGO has gained a lot of popularity since its release on Android and it currently holds a strong user base. It comes free of charge. 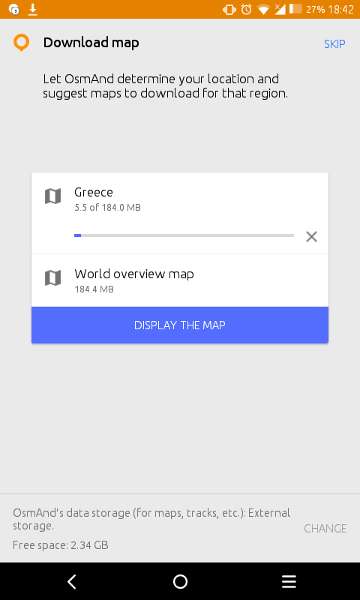 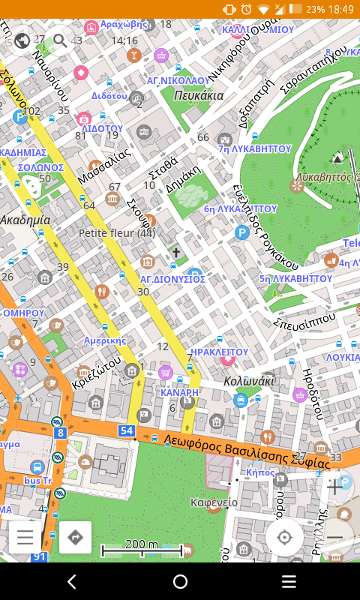 We included OsmAnd/OsmAnd+ in our list of best satellite navigation apps because this project proves that open source and collaborative work can produce high quality, feature complete and competitive products. OsmAnd uses maps from the OpenStreetMap (OSM) database, another open source project. The user can report bugs on the maps and upload POIs directly through the application.

Also read: How to Calibrate Sensors on Android Devices

Maps can be downloaded for offline use and two different versions of map data are available: full or road network only(smaller download size). Also, map data are updated quite often, one or two times per month. OsmAnd features different modes for cyclists and pedestrians with special paths for each mode and can even record the user’s trip in the background. Turn-by-turn navigation is available using recorded and synthesized voices. GPX file import and routing are quite easy.

Users can download and use OsmAnd free of charge with some limitations: there is a download limit of 7 map files and no support for Wikipedia POIs in the free version. OsmAnd+ is the paid version of the application (considered as a donation to the project as stated by the application’s developers) with a price of 6.99 Euros, which does not feature any limitations.

Finally, this application features many plugins, both free and paid, which extend its capabilities. You can use a plugin to enable displaying of contour lines and hill-shading, for example. Also, the Mapillary plugin will add street-level imagery to the application.

Read next: Android System WebView – All You Need to Know