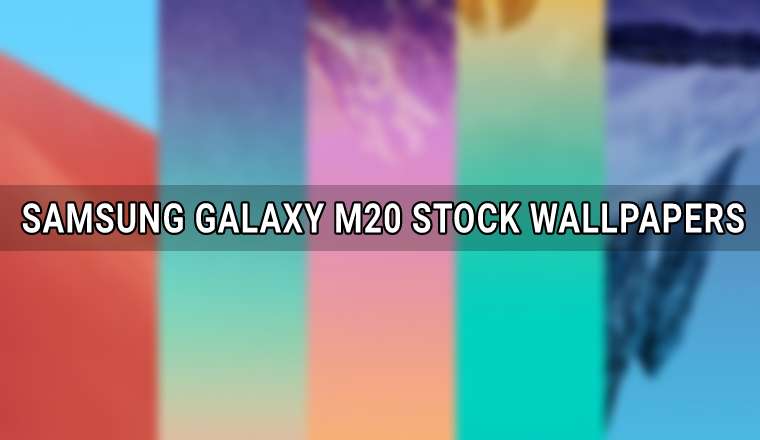 Korean tech giant Samsung is all set to unveil the all-new Samsung Galaxy M series on January 28, 2019, in India as per Amazon India. As per my opinion, the M series is expected to replace the C or perhaps the J series of devices in the Samsung smartphone portfolio. Also, please note that the device may be called M20 or M30. Speculations aside, we can only be sure when the new M series go official later this month. Whatever it may be, all you have to do is enjoy the wallpapers for now.

The upcoming Samsung Galaxy M20 or whatever it may be called is expected to be equipped with a waterdrop style notched display or an Infinity-V display as Samsung would like to put it.  The Galaxy M20 would feature a Gorilla Glass covered main 6.3in Full HD+ extra tall 19.5:9 LCD display with a resolution of 1080 x 2340 pixels.

The performance will be handled by an in-house Exynos 7885 Octa SoC in-house aided by 3GB of RAM. Internal memory is expected to be at 64GB and 32GB in size. With that said, the internal memory will, of course, be expandable, as the device is bound to be equipped with a memory card slot (up to 256GB). Coming to biometrics, a fingerprint scanner will be present at the rear of the device as evident from the leaked sketches.

Photography is expected to be handled by a dual camera setup at the rear featuring a primary 13MP (f/1.9 lens) + 5MP (f/2.2) sensors combo assisted by an LED flash.  A selfie camera will be present upfront but no details are available regarding the sensor but we expect an 8MP unit to be onboard. Both cameras will be able to record at least 1080p videos @ 30fps, which is a sure deal.

Coming to the connectivity side of the device, it will have you all covered with Dual-band Wi-Fi 802.11 a/b/g/n/ac.  Bluetooth 5.0 LE with support for A2DP and EDR, GPS for navigation and location-based services and more are onboard. Thankfully, a 3.5mm audio jack is expected to be present onboard.

As expected the upcoming Galaxy M20 will ship with Android 8.1 Oreo-based Samsung Experience UI and not the new Samsung One UI because the latter will come bundled with the upcoming Samsung Galaxy S10 out of the box.

Paint jobs and Pricing information is not available at the moment. As for the availability, initially, the Galaxy M20 will be available as an Amazon exclusive device in India and of course will also be available on the Samsung India webpage.

Alrighty, now let’s download the stock wallpapers of the Samsung Galaxy M20 smartphone. The wallpapers are of the 16:9 aspect ratio and the resolution is 1080 x 1920 and 2560 x 2560 pixels. The wallpapers look and feel scenic, soothing, elegant, minimalistic and simple.

Download the Samsung Galaxy M20 wallpapers via the Google Drive link given below or pick your favorites from the gallery.