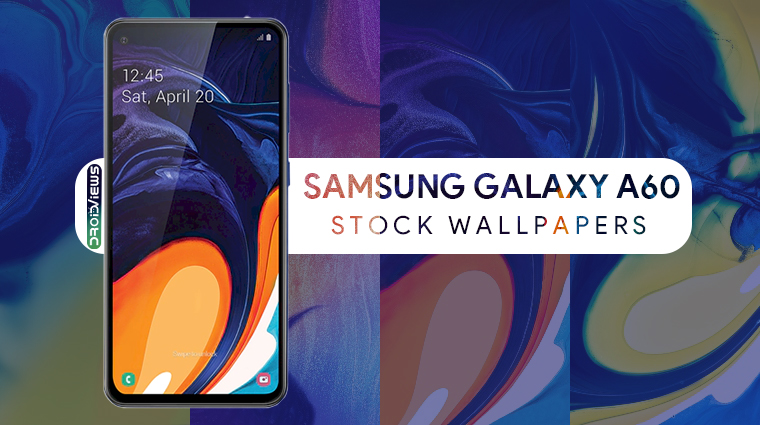 The Galaxy A60 is a mid-end smartphone with great design and hardware specifications. Today, we have the Samsung Galaxy A60 wallpapers for you. There’re 4 stock wallpapers below with 1080 x 2340 px resolution which translates into a 19:9 aspect ratio. However, before you download the wallpapers, let’s check out the technical aspects of this new phone.

The Galaxi A60, like the Galaxy A50, looks a lot better than many expensive flagships thanks to the nearly all-screen design. The Samsung Galaxy A60 is a mid-range offering from Samsung. The company is hoping that the motorized popup camera and the all-screen design will be enough selling points for the device.

In terms of design, there isn’t a lot of difference compared to the Galaxy A60. The front of the phone is entirely the screen and a little bottom chin. On the back, we have a gradient glass back, something we see in almost every smartphone these days. There is a vertically aligned triple camera module towards the side.

It looks different though the way it kind of flows down the top edge of the device and onto the back like a ribbon of some sort. There’s a rear-mounted fingerprint reader as well in a place you’d expect. The Samsung logo is at the very bottom of the phone.

The power button and volume rockers are all on the right, just like other Samsung phones. There’s a 3.5mm headphone jack, but with micro USB 2.0 and a single speaker grill. All of these fill up the bottom edge of the device. On the left is the SIM tray which accepts two Nano SIMS and a microSD card.

The display on the front is a 6.39-inch Full HD+ Super AMOLED capacitive touchscreen with a resolution of 1080 pixels by 2340 pixels.  This is slightly smaller than the Galaxy A60’s 6.53-inches but that phone had an LCD panel and this one is a Super AMOLED. The aspect ratio is 19.5:9 which is the same for the Galaxy A60 stock wallpapers.

The battery is slightly smaller than the Galaxy A60 at 3700mAh and supports fast charging at 18W.

Like all Samsung Galaxy phones, this one runs Samsung’s custom skin called OneUI on top of Android 9.0 Pie.

The triple rear camera set up on the back consists of a beefy 48MP rear camera with f/1.8 aperture, an 8MP, f/2.2, wide-angle lens, and a 5MP, f/2.4 depth sensor. There’s an LED flash as well between the camera sensors. For comparison, the primary sensor on the Galaxy A50 was 12MP.

The selfie camera is hidden in a motorized pop-up module so it’s not technically in the front. But you get a 32MP camera instead of the 25 on the Galaxy A60 with f/2.0 aperture and support for HDR. The rear cameras support HDR too along with panorama shots. They can record video of up to 2160p and 1080p at 30 fps. The front camera can record at 1080p, 30fps as well.

There are four Galaxy A60 stock wallpapers which are simple abstract color flow designs. The wallpapers have the same resolution as the Galaxy A60’s display, i.e. 1080 x 2340 px. The aspect ratio comes down to 19.5: 9.

The images shown below have been are compressed JPEGs and are only meant for you to see what the wallpapers look like. Compression helps us keep the page loading time to a minimum.