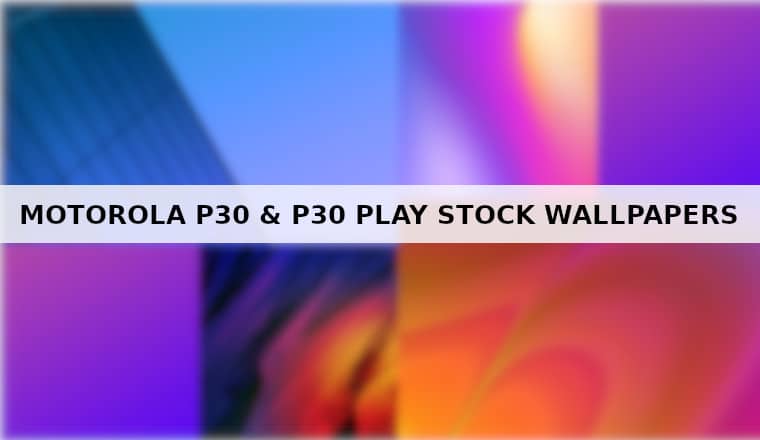 Motorola P30 and Motorola P30 Play are budget offerings from the Lenovo owned Motorola. For the price, the devices have a decent spec sheet, nothing out of the ordinary. What will interest most people about them, isn’t the hardware though. Both the Motorola P30 and P30 Play pack in some great wallpapers which anyone would want, even if not particularly interested in the phone itself. We have the stock wallpapers available here for download.

In terms of design, both smartphones are quite identical. The front of the devices features a big, iPhone-y notch and a bottom chin with the Motorola branding in a Nokia-esque fashion. There’s also a Motorola M logo on the fingerprint sensor making sure you don’t mistake it for a Nokia device no matter what angle you look at it from. If you like a notch both the devices will look pretty amazing, and if you don’t, well. The Motorola P30 is the bigger brother here and comes in White, Black, and Aurora color options while the Motorola P30 Play is only available in White and Black.

The Motorola P30 Play features a 5.86- inch IPS LCD display which is on the smaller side considering the recent trend of 6+ inch displays on smartphones. Not necessarily a bad thing though. It has a 720 x 1520 resolution, an aspect ratio of 19:9 and a pixel per inch count of 287. Not the most good-looking displays out there in terms of the hardware but quite okay if you’re not a Pixel peeper.

Underneath the display sits the very efficient Qualcomm Snapdragon 625 SoC paired with 4GB of RAM and 64GB of internal storage. The device supports up to 256GB of external microSD storage. The back of the device, apart from the logo-fied fingerprint scanner, features a primary rear 13 MP f/2.0 shooter with a secondary rear 2 MP shooter. The company calls it an “AI Camera” which sounds nothing more than a marketing term.

The front-facing 8 MP f/2.2 camera can identify a user’s sex, age, skin color, skin quality, etc. This helps it automatically adjust the beautify feature according to the user’s face. The device is also known as the Motorola One outside China because it is an Android One device, outside of China. It runs stock Android Oreo out of the box (ZUI 4 in China) and is upgradeable to Android Pie.  It’s all powered by a 3000 mAh battery.

The larger Motorola P30 boasts of a 6.20 inch IPS LCD screen with a resolution of 1080×2248 pixels. The aspect ration is slightly shorter at 18.7:9 but the pixel per inch count is quite decent at 402. The Qualcomm Snapdragon 636 SoC powers the display and is helped by 6GB of RAM and 64 GB or 128 GB of internal storage. The storage is expandable up to 256GB but the slot for the second SIM is used for it.

As far as the cameras are concerned, it packs a 16 MP (f/1.8) primary camera and a 5 MP (f/2.2) depth sensor as the secondary camera on the rear. The notch in the front houses a 12 MP front shooter for selfies. ZUI 4 runs on top of Android 8.0 Oreo although the device is upgradeable to Android Pie. A 3000 mAh battery powers the entire set up.

Both the Motorola P30 and Motorola P30 Play are dual-SIM devices. Although the P30 Play also has a single SIM variant. The usual connectivity features can be found on both the smartphones. This includes a 3.5mm headphone jack and a reversible USB Type C connector. The fingerprint sensor is the only biometric identification sensor on the devices although Face unlock is supported via software.