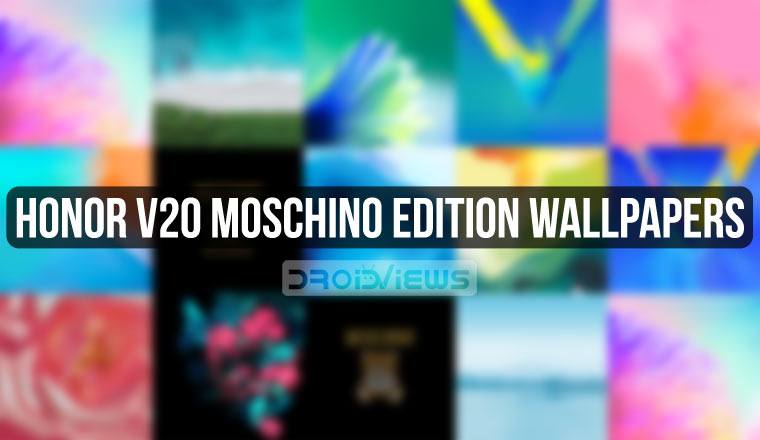 Huawei launched the Honor V20 in December 2018. Earlier, we shared the stock wallpapers from the Honor V20 (View 20). The company just unveiled a special edition of the phone. You can now download all the Honor V20 Moschino Edition wallpapers in Full HD+ quality. There are 16 wallpapers below with 2160 x 2310 px resolution and 19:9 aspect ratio.

Huawei has been having some trouble cracking into the largest smartphone market, the USA. Despite that, the Chinese company been enjoying tremendous success in the market. It is now ranked the second largest smartphone maker, above Apple, and below Samsung. Both of those companies do have a major share in the US market. This month, Huawei announced another new smartphone through its sub-brand Honor. The Honor V20 is a unique looking phone and one of the first smartphones with a display hole.

The camera hole in the display is not the only unique design aspect, in fact, it isn’t unique at all now. Huawei had already announced the Huawei Nova 4, another phone with a similar display hole. Through the last few years, Huawei has been creating some of the most visually stunning smartphones. It was Huawei that first introduced the dual tone twilight color with the Huawei P20. The Honor V20 Moschino Edition has a special back panel which shows of a V shape design when light shines on it. 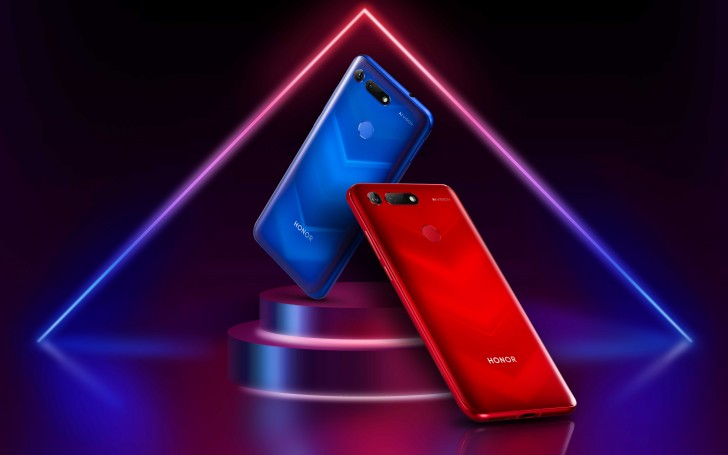 The rear camera set up isn’t something I personally like but it is unique nevertheless. The two cameras are arranged horizontally with the secondary lens paired up with the LED flash in a single module while the primary camera sensor is just… on its own. The bottom end of the device contains the USB type-C charging port and the speaker. There is a headphone jack on the top while the buttons are all located on the right side. The sim tray is on the left in its usual spot. The fingerprint scanner is located on the back of the device in its usual place as well.

The V20 Moschino Edition has been built around a gorgeous 6.4” LCD panel with full HD+ resolution (1080 pixels by 2310 pixels) with an unusually tall aspect ratio of 19.25:9. All of that calculates to a pixel per inch (PPI) count of 398. The device is powered by an octa-core HiSilicon Kirin 980 processor paired with either 6 GB RAM or 8 GB RAM. There are two available storage options: 128 GB and 256 GB.

The rear camera setup contains a 48 MP Sony IMX586 rear shooter which is a huge 1/2-inch CMOS sensor (0.8 µm/pixel) with Quad-Bayer array that allows pixel binning for HDR 12 MP night shots. It is joined by a 3D ToF sensor at the back which helps in 3D body shaping. In other words, you can artificially look better in full body pictures. The hole in the display houses a 25 MP selfie camera. Another unique aspect of it is that the camera does not physically penetrate the display. Huawei says they’ve only cut the LGP layer on the display while leaving the OCA, POL, color filter, array intact.

On the software side, it runs EMUI 9.0 on top of Android 9.0 Pie and supports EIS as well as GPU Turbo 2.0. It also supports Huawei’s desktop mode which is a bit like Samsung Dex. So the Honor V20 Moschino Edition can be used as a PC when connected to a monitor, at least in theory. It’s a dual SIM device and supports dual-frequency GPS positioning as well as a triple Wi-Fi antenna.

All of this is powered by a 4000 mAh battery which should be enough for any kind of user. It also supports Huawei’s Super Charge technology for rapid charging.

We have a total of 16 Full HD+ stock wallpapers fro the Honor V20 Moschino Edition in this pack. These have a resolution of 2160 pixels by 2310 pixels which is more than enough for any smartphone display, even desktops. A couple of these wallpapers are also of the resolution 1080 pixels by 2310 pixels, which is the same as the device’s display. We’ve uploaded a few of the Honor V20 Moschino Edition wallpapers below so you can decide whether you like them. if you do, you can download the entire pack in a single zip file from the download link below.