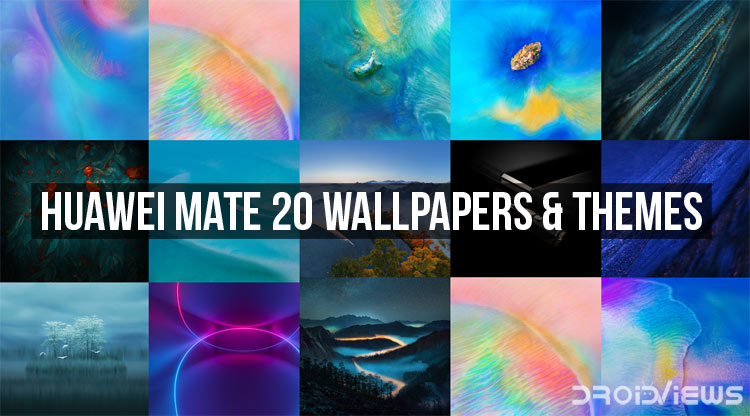 Huawei Mate 20 isn’t a device that has been announced yet but it sure has been teased. The Chinese OEM has confirmed that it will announce the Mate 20 on October 16th. The Huawei Mate 20 will be the first Android device to feature a Kirin 980 SoC. What’s special about the Kirin 980 SoC is that it is the first ever SoC built using the 7nm process. Much of what we know about the device is due to the firmware obtained by @FunkyHuawei. That firmware received an update to EMUI 9 which has brought some new stock wallpapers, a couple of Live wallpapers and some new EMUI themes.

These were extracted by the folks over at XDA from the firmware who happen to have the original leaked firmware. Thanks to all that, we also know that the Mate 20 will feature a 4200mAh battery and a 6.3 inch AMOLED display. It’ll most probably support wireless charging and offer 6GB of RAM and 128GB of storage. Other than that, an APK teardown by the XDA Developers also found evidence of an Underwater Mode, AI Zoom and more from the Mate 20’s camera software.

The Underwater mode would allow you to use the volume buttons to take a photo or video and the power key to launch or exit the camera (since the touchscreen won’t really work underwater). The Huawei Mate 20 will still be rated IP67 rather than IP68, which is the same as the Huawei P20 Pro. The AI Zoom would adjust the zoom level so that your subject is always at the center of a photo. Then there’s AI Cinema which applies live filters to your videos, and a Video Bokeh which applies background blur to your videos.

The stock wallpapers extracted from the EMUI 9 firmware have a resolution of 2160×2244. That means they’re going to look good on any device as long as the display is good enough. There are a total of 14 wallpapers in the pack ranging from abstract designs to landscapes and Google earth style wallpapers. The images depicted below have been scaled down to reduce page loading time. You can download the full-sized wallpapers from the links provided below.

It may come as a surprise but this time around Huawei is including Live Wallpapers as well. The EMUI 9 firmware made available by FunkyHuawei also has a couple of live wallpapers that was ripped out by XDA Recognized Contributor linuxct who also ported it for other devices not running EMUI 9. So no matter which device you have, the live wallpapers linked below should work on your device. The only requirement is that your device should be running Android 6.0 Marshmallow and above.

We can confirm that it runs on OnePlus 6 running the Android Pie based Oxygen OS Open Beta 3. The two live wallpapers are named Legend and MilkyWay. Having used them, they seem more inspired by Apple’s 3D Touch based live wallpapers than anything on the Android side.

The Live Wallpapers are based on two of the stock wallpapers included within the firmware also named MilkyWay and Legend. They remain static unless you touch the display or perform a gesture quite like Apple’s 3D touch live wallpapers on the iPhone. The Legend live wallpaper changes from day to night to snowfall and repeats the cycle every time you touch it. MilkyWay, on the other hand, is a bit more stylish in the way sparkling stars flow upstream as long as you touch the screen. You can download the APK linked below to install both the wallpapers on your device.

The Mate 20 Themes were meant for EMUI. Therefore, they will only work on Huawei and Honor devices running EMUI 8 and above. The themes make use of the stock wallpapers linked above for download as well as make some minor tweaks to the Huawei icons like all other stock EMUI themes before them from Huawei. There are a total of 12 themes overall included in the zip files linked below.