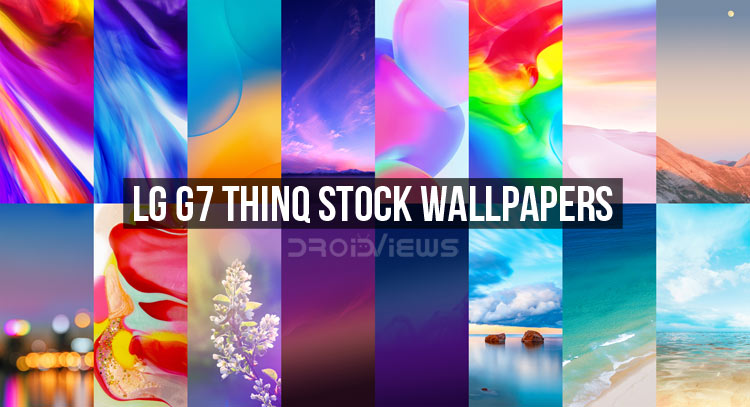 The long-awaited G7 ThinQ has not been released yet but we have the stock wallpapers from the phone. Download 19 LG G7 ThinQ wallpapers in 4K quality with 1440 x 3120 px resolution.

Android smartphones this year have already come to a point where anytime I see a new one I can’t help but shake my head in disappointment. Yes, it’s about the notch. The sad part is it is getting worse. LG, the Korean manufacturer which is not Samsung, has launched its latest flagships with two simultaneous events in New York and Seoul. These are the LG G7 ThinQ and LG G7+ ThinQ, ironically. Did LG really ThinQ this through? To be fair, the LG G7 ThinQ and the Plus version have got everything you expect from a 2018 flagship. They have the latest processor, enough RAM, a good camera, an ugly OEM skin, the notch (because that’s a feature now), and some stock wallpapers for your appeasement.

For those who still remain in darkness after that vague specs description above, the LG G7 ThinQ and G7+ ThinQ both feature a Snapdragon 845 SoC. The display on either is a 6.1-inch 19.5:9 3120 x 1440 pixel notched LCD panel. LG does provide the option to disable the notch just like Huawei but there’s a key difference. While Huawei went with an AMOLED for its P20, LG is still sticking to LCD. So when the notch is disabled you can still see the display pretty clearly considering its all backlit, unlike an AMOLED. Did LG really ThinQ this though?

Android 8.1 Oreo has been out for a while now, and if you’re aware the Android  P developer preview has been out as well. Yet, the LG flagships arrive with Android 8.0 Oreo out-of-the-box. The only difference between the two devices is in terms of RAM and storage. There’s 4GB of LPDDR4X RAM and 64GB of onboard storage on the G7 ThinQ and 6GB RAM plus 128GB internal storage on the G7+ ThinQ. Both ThinQ devices support expandable storage up to 2TB.

The dual camera set up on the back features a 16MP primary Super Wide Angle sensor with a f/1.9 aperture. The lens used on this is a 107-degree wide-angle lens. The secondary sensor is also a 16MP sensor but with a f/1.6 aperture and a 71-degree lens. The front of the devices features an 8MP f/1.9 sensor with an 80-degree lens. Knowing LG it is pretty safe to say this will be one of the best smartphone cameras on the market if not the best. The cameras have AI smarts that Huawei is already doing better. A 3000mAh battery powers the entire set up.

There is the headphone jack. It’s not new, agreed, but in this day and age, I’ll give LG unfair points for it. The unique feature of these phones would be the presence of a Bixby-esque button on the side. It launches the Google Assistant instead with a single tap. A double-tap launches Google Lens. A Super Far-Field Voice Recognition enables the LG G7 ThinQ to hear Google Assistant commands from as far as 5 meters.

The LG G5 was LG’s most ambitious approach ever. In simple, plain words, it tanked. When LG took a safer approach with the LG G6, we understood. So what’s wrong with LG taking the similar safe approach with the LG G7? For one the notch. The notch popularized by the iPhone X that is getting old and tiring already. I’ve lost count of how many phones have already had it and how many are still coming later this year. LG’s notch “disable” doesn’t even work really. A visible black bar up top on both sides of the notch is worse than the notch visible alone. The LG G5 tried too hard, the LG G7 ThinQ isn’t even ThinQing of it. Apart from the notch, the G7 looks pretty much like previous LG flagships.

For the notch, there’s an argument that it is unavoidable as OEMs look to expand the displays and still have the front camera and earpiece. Let’s ignore what Xiaomi is doing with the Mi Mix series, or what Samsung did with the S9, for the sake of argument. Still, with the notch like everyone else’s Huawei P20 had a number of features that set it apart. LG’s latest offerings have an extra button. Did LG ThinQ this through?

I suppose after two disappointing flagships and continuing losses, LG cannot afford to ThinQ. It is safe to say that a new generation of OEMs has replaced the fallen idols. In a world of Huawei and Xiaomi, Sony, LG, and HTC have all fallen in the same line. Their flagships have as much of public attention as an Asus flagship if not less. At least Samsung stuck to its own design this year.

Ranting aside, the new LG flagships do bring about quite a few stock wallpapers for our aging devices. They’re all pretty much similar too. The wallpapers below are high quality compressed images. We’ve packed the full-sized wallpapers into a zip archive that you can download from either of the two links below. It contains 33 FHD+ wallpapers.

You may download these wallpapers but they are not actually the stock wallpapers. We mistakenly shared them from a wrong source. Sorry for the inconvenience!