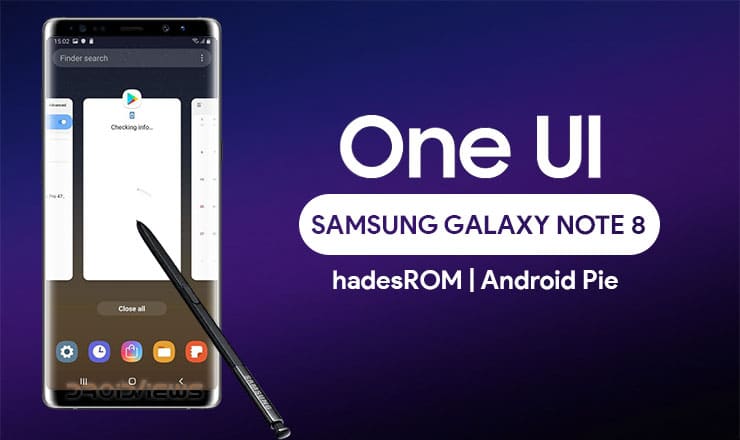 The One UI or Android Pie is not available for the Samsung Galaxy Note 8 officially yet. However, there is still a way you can enjoy Pie or Samsung One UI on Galaxy Note 8 (SM-N950F and N950FD). If you have a rooted Note 8 Exynos variant, hadesROM is here for you.

Samsung is currently testing out Android Pie public beta builds on some of its devices. Even though the largest smartphone maker in the world might be late to the Android Pie party, it wants to make an entrance in style.

The style is known as One UI which is a major UI redesign that Samsung users are in for. It might be quite a while though until the year-old Samsung Galaxy Note 8 gets some Android Pie love from Samsung. The company is yet to release the update to the One UI on Galaxy Note 8.

Despite the major differences in the looks and feel department, Galaxy Note 8 does run Android. That means you don’t have to wait for Samsung to get your taste of Android Pie. In this case, you don’t even have to wait to get your taste of Samsung’s One UI. XDA developer corsicanu has put together a custom ROM based on Android 9.0 Pie for the Samsung Galaxy Note 8. More specifically, the ROM is based on the N950FXXU5ZSA5 beta android pie firmware. The ROM has been “heavily debloated” but is richer in terms of features which include Dolby ATMOS, dual speakers, increased headphone volume, etc.

The method described below is only meant for the Exynos variant of the Galaxy Note 8 [N950F/FD]. Being based on the beta firmware, the ROM will break SafetyNet and also Knox, and thus void your warranty as well. Tripping Knox also means you will lose features like Samsung Pay and Secure folder as well as the ability to use some banking apps. Once Knox is tripped, the effects are permanent and unrooting will not help. Furthermore, OTA updates will also stop working. The process also requires that your device be formatted so make sure you have a backup of everything important, even files on the internal storage.

Do not try this with any of the Snapdragon variants, unless you really want to risk bricking it. Flashing a custom third-party firmware or ROM on your device is always risky, even if you do have the Exynos variants that this method works on. Nobody can guarantee that you’d follow the instructions exactly, or that things will always happen as expected even if you do. You must take responsibility for the risk that you’re taking. DroidViews cannot be held responsible for any damage to your device.

To install a ROM, you’ll need a custom recovery such as TWRP recovery. In order to have a recovery, you must have an unlocked bootloader. Also, make sure you have USB Debugging and OEM unlock enabled in the Developer options. Those are the only requirements but there are also a couple of precautionary steps. You should make sure that your Galaxy Note 8 is charged to at least 70%. This makes sure that it doesn’t die while flashing the ROM. If that happens, you could end up with a phone with no bootable firmware and a dead battery and that’s not a great situation. Also, make sure you backup all of your important data, just in case things go spiraling down and south.

TWRP can be installed easily if you follow the guide linked below. The guide also contains the steps to root your Galaxy Note 8. You can skip those since root isn’t exactly necessary here.

Back when we published it, there was no official TWRP for the Galaxy Note 8 but now it does. Download the latest TWRP recovery from the link provided below and use that instead.

How to Install Android Pie & One UI on Galaxy Note 8

The first reboot may take longer than usual but when it does boot up, you should have a brand new interface on top of a relatively new Android Pie.