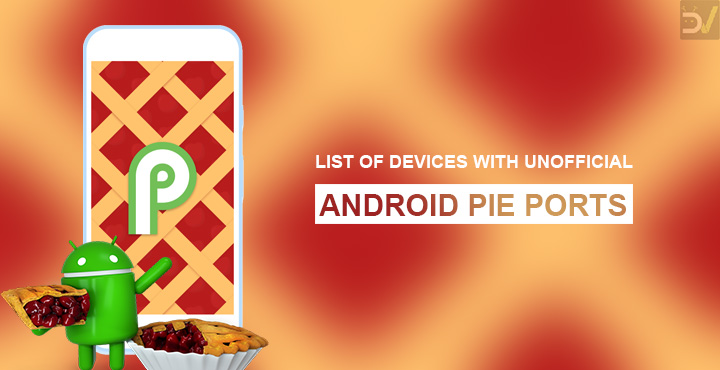 Here’s a huge list of devices for which Android 9.0 Pie ROM Ports are available right away. Most of the ROMs listed below are unofficial ports of LineageOS, AOSP and Carbon ROM. If you own a rooted Android phone and have TWRP installed on it, you can enjoy Android Pie right now.

Every month Google releases adoption numbers for different versions of Android. The numbers give us an idea of how quickly the latest version of Android is reaching users or which Android version is still the most popular and other interesting tidbits. If you’ve noticed though, after a while, the numbers for the latest Android version increase more rapidly than before. My hypothesis is that happens because custom ROMs start making their way onto more and more forgotten devices. Android 9.0 Pie was released about a month ago and we’re already seeing ports of it for so many devices.

Officially, after a month, Android 9.0 Pie is only available for the Google Pixel/Pixel XL, Google Pixel 2/Pixel 2 XL, and the Essential Phone. Although there are other devices running official beta versions of Android Pie such as the OnePlus 6. These devices, as well as some others, will soon be receiving official Android Pie updates from their OEMs. Some OEMs like Sony have already announced their Android 9.0 update plans. Some of the devices to receive official Android Pie builds in the near future are:

In case you’ve forgotten or somehow have managed to not know about them, here’s a quick glance at some of the cool new features in Android 9.0 Pie.

Android Pie uses AI and on-device machine learning tech from DeepMind to determine your usage pattern. This helps the OS prioritize battery power for the apps and services you use the most. Google says this will result in up to 30% reduction in app wake ups.

Android Pie remodels the Android navigation bar replacing the iconic three buttons with a single pill button at the center. The back button still appears when needed though it looks a little different. Everything else can be handled by the pill button alone. Swipe it up to get to the overview screen which is somewhat similar to the recents screen except it has a dock and the Google search bar. Flick the pill button right and you can quickly switch between apps. Swiping it towards the right brings up the recents screen and the pill button becomes a scroll bar allowing you to quickly slide through your recent apps.

Both App actions and Slices are deep actions that you would normally find inside apps, visible around on the interface of your OS, in different parts such as the Launcher, Smart Text Selection, the Play Store, the Google Search app, and the Assistant.

This feature is still under beta testing and currently only available for Google Pixel users but it will perhaps be a part of the Android 9.1 update. It’s essentially a new dashboard in the Android settings where you can see how often, when, and for how long you are using the apps on your phone. The dashboard also allows you to set up the number of minutes you are allowed to use each app in order to limit yourself from basically living on Snapchat.

We’ve already discussed the new features in Android Pie back when it saw its first beta release. Things haven’t changed much if at all since then and the stable Android 9.0 Pie still retains all of those features. You can check out our list of new Android Pie Beta features for detailed information.

List of Devices for Which Android 9.0 Pie ROM Ports are Available

This is it! If you own any of the devices listed above, head over to respective device threads, download the ROM and follow the instructions to flash it. The list is based on an article published on XDA blog.