This past week has been quite a ride. Announcements, Nexus launch, and then the big Android Lollipop launch. But that wasn’t all! Every single time that a new version of Android is released, users look at their handset OEMs with probing eyes and only one question on their mind — when will our updates arrive?

While any manufacturer has got a tough time ahead to meet their customers’ expectations, the Nexus users must really be readying their claws! The biggest gain of using the pure Google experience is the fact that updates arrive almost instantly on them since there is no forking involved. And while we are seeing a lot of leaks all around, specific to some devices like the LG G3, Galaxy S3 (and some others too); they are mostly just that — test builds which can hardly be termed stable. But this leak is different, the LRX21P Android Lollipop build for the Nexus 7 2012 (WiFi) we are talking about, might be the final ‘stable’ ROM we’ve been waiting for!

But that is a speculation, and we won’t know for sure until and unless there is an official confirmation of the same. But Google has been mum till now so it won’t hurt if we try it ourselves and be among the early adopters of Android Lollipop! Yeah, we guess we gave you a good enough motivational piece of dialogue, so it’s time for the stuff that matters.

But we need to give you our word of warning first. We should remind you to keep calm while doing these steps, shouldn’t we? 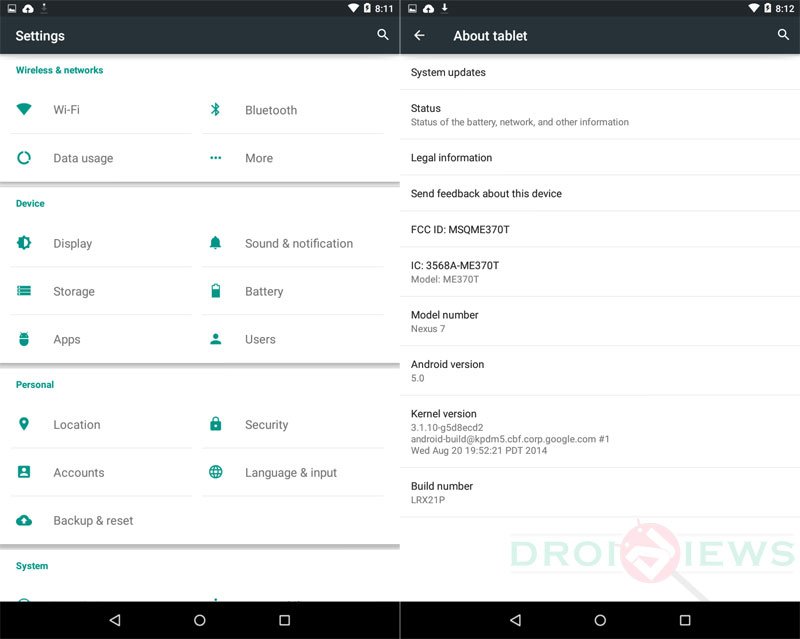 Things can go really wrong for your device if you don’t know what you are about to do and we’d suggest you to take a lot of care while following these steps. It is a tried and tested method, and any problems,( if they do arise, that is) can only be caused by your lack of ability in following this guide step by step. Keep your calm, and be careful!

So that’s to it! Give the ROM a try and you will know how it really is. From what we have seen till now, this seems to be a pretty stable build, we’d say. Whatever happens, the final official release by Google will confirm whether this is THE build we have been waiting for or the final version still needs to iron a few glitches here and there. Don’t forget to share your personal experience of using this ROM with us! You’re welcome.