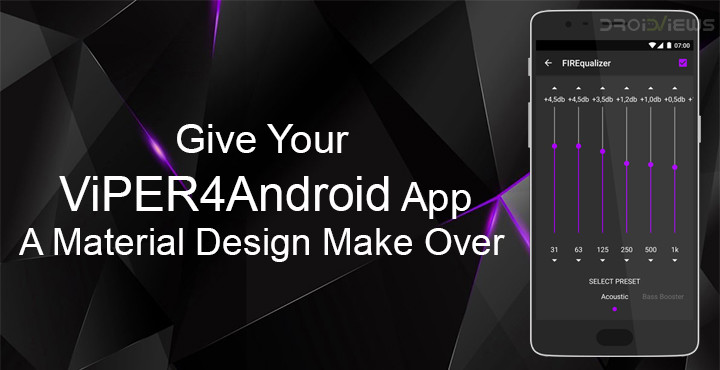 Here at DroidViews, we publish a lot of tutorials about a lot of different things, revolving around Android. We’ve discussed some great audio mods for specific devices and some rather universal mods such as A.R.I.S.E. Naturally, we’ve also talked about ViPER4Android before, on a couple of occasions. Many rooted Android users still use ViPER4Android because it is still one of the best audio mods available. But if you did follow our guides and installed V4A you may have noticed the UI design does not seem very inspiring. It’s not bad, by any means, I would think, but it lacks that certain Material touch. Luckily, you were apparently not the only one who wanted A ViPER4Android app with Material Design.

If you’re worried everything will become white, just like it usually does with Material Design, don’t be. The theme, called ViPER4Android FX Materialized, keeps the dark backgrounds and changes the accent color from blue to a purple that much resembles the older V4A logo color. The clunky looking toggles have been replaced by checkboxes instead which give it a much cleaner look. The sliders have also been redesigned to look more like the sliders you’ll find elsewhere on an Android.

Do keep in mind this is all but a theme, and not the app itself, unlike the Materialized version of the Xposed Installer app. This means you will need to have the V4A app already installed. This app will simply theme it and give it a Material Design makeover.

Here’s how to install ViPER4Android on Android Nougat.

If you don’t know how to install and use Substratum themes check out this link.