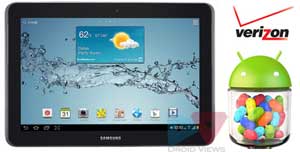 It’s a big day for the owners of the Verizon variants of the Galaxy Tab 2 10.1 and the Galaxy Tab 2 7.0 as these second generation tablet devices have now been getting some Jelly Bean pinch today. This long-awaited update has arrived rather late because all non-carrier branded variants have seen it long ago. With the Android 4.1 Jelly Bean update the users of Tab 2 can now jump to the Jelly Bean from Android 4.0 Ice Cream Sandwich.

Many users of Verizon’s Tab 2 has already started to get the update that is rolling out in phases and will reach all devices pretty soon. You can manually check for the availability of the update via Over-the-Air from Settings> About> Software Update on your device.

Having updated your Tab 2 to the new firmware, you will be greeted with a host new features and improvements. Some of these features include Project butter, Google now, new Notification Panel, better multitasking, enhanced widgets, etc. Besides these, the update  will also be bringing the following new things:

Download the PDF file from Verizon that details all the features of the new Android 4.1 Jelly Bean Update.