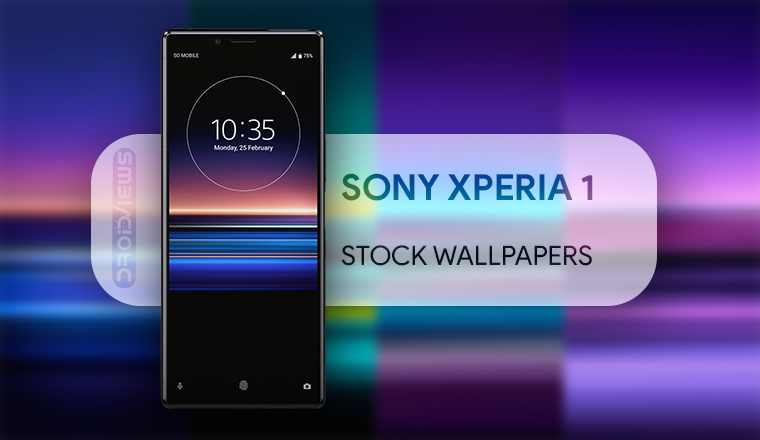 Sony is back again with an entirely new smartphone, doing away with the complicated naming scheme of its previous lineup. There’s no Xperia XZ3 and there won’t be. Sony is going ahead with a much simpler name, Sony Xperia 1. The Sony Xperia 1 is hardly the first Xperia flagship but it is the first in a new lineup. As always though, we have some new wallpapers with the phone. You can download Sony Xperia 1 stock wallpapers right here.

Xperia 1 is the first smartphone in a brand new series of smartphones from Sony. The company has had a habit of discontinuing their flagship series after a few phones. As always, Sony is trying to stand out of the competition and this time it literally does.

Put the Sony Xperia 1 next to any smartphone and you’ll see that the device does stand out. It’s extra tall with a 21:9 aspect ratio and it’s also super slim, unlike previous Sony phones. The device is only 8.2mm thick. It’s still not as slim as the iPhone or the Galaxy although it does feel a lot narrower due to its height. Corning Gorilla Glass 6 protects both the front and back of the display, as much as glass can protect anything. A triple vertical camera module fills the gap between the top and center of the device along with a dual LED flash on top of it.

The Sony logo adorns the center of the back while the Xperia branding sits subtly at the bottom. The edges are rounded off making the device more comfortable to hold in the hand. On the right side is a side-mounted fingerprint scanner. It sits below the power button and above the Volume rockers. Sony usually built those into the Power button but has had problems with Qualcomm patents in the US. There is also the dedicated camera button at the very bottom which is kind of a unique Sony feature. It’s been there on Xperia smartphones longer than the home button on the iPhone.

There is no notch on the display because Sony says the slim bezels help boost the connectivity. To be fair, a notch on that tall phone would have looked hideous anyway, like it does on most phones. The bottom edge of the device houses a speaker grille and a USB type C charging port.

The lack of a notch means the screen-t0-body aspect ratio is 82% which isn’t all that impressive in 2019. Although, Sony more than makes up for it with a pixel per inch count of 643 giving you one of the sharpest displays you can find on a smartphone. Not even the Pixel peepers should be able to notice any pixels on this one.

As you’d expect from a flagship Android phone in 2019, the Sony Xperia 1 is powered by the Qualcomm Snapdragon 855. The CPU on the chip is paired with the Adreno 640 GPU. There is 6GB of RAM to help the processor out with 64GB and 128GB internal storage options. There’s a microSD slot which supports external storage up to 512GB and also acts as a secondary SIM slot.

The battery is, by today’s standards, a meager 3330mAh. Sony does offer plenty of software features to enhance the battery life and their Stamina Mode is one of the best battery saving software implementations you’ll find. It does not support wireless charging though, despite the glass back.

On the software side of things, the Xperia 1 will ship with Android 9.0 Pie out of the box with Sony’s skin on top. The company has included certain features to take advantage of the super tall aspect ratio as well.

The Sony Xperia 1 stock wallpapers pack contains a total of four wallpapers. These have a resolution of 1096 pixels by 2560 pixels so they should look good on any display, as long as the display itself is good enough. We’ve uploaded the wallpapers in JPEG format below which you can download. These images are still high quality but they have been compressed.

So they’re great for viewing and deciding whether you like them or not. If you want the full-size images, some of which are in PNG format, you can download the Sony Xperia 1 stock wallpapers from the link provided below the images.