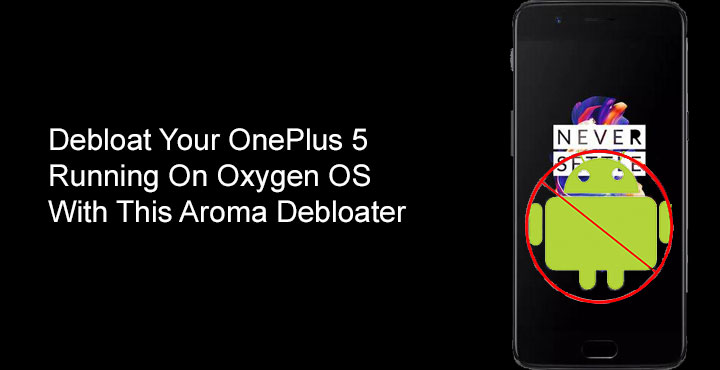 The OnePlus 5 with its surplus amount of RAM (no matter which variant you pick) and the Snapdragon 835 chipset at the core is already fast enough. It is probably one of the fastest Android smartphones if not the fastest Android smartphone out right now. And that shouldn’t surprise many considering the near stock Android experience and the optimizations done by the OnePlus team to make the device fast and fluid. When it comes to bloatware, OnePlus devices are among the luckier ones that don’t really struggle with the said problem. As such, there aren’t many reasons to debloat your OnePlus 5. Below, we’ll be describing an easy way to remove bloatware on OnePlus 5 running Oxygen OS.

It’s still going to be just as fast and responsive as it is with the supposed bloatware, if you would call it that. We’ve already mentioned how the major chunk of bloat apps on a OnePlus device comes straight from Google. The only bloat that OnePlus adds are actually testing and debugging services that might even be helpful at some point, although not necessarily. But if for some reason your do wish to get rid of the pre-installed apps on your OnePlus 5, you can do so provided your device is rooted. That’s because the debloater script we’ll be using here does require that your device is rooted. It also requires that you have a custom TWRP recovery installed on your device.

Also note that apps that you have previously disabled from the settings or frozen using root apps like Titanium Backup won’t be removed. If you want to remove them, first re-enable/defrost them, reboot the system once just to make sure everything is fine. After that, you can move on ahead with this guide. To get an idea of what apps the debloater can allow you to remove, check the screenshots below. As already said, the Oxygen OS from OnePlus isn’t exactly bloated per say, unless your definition of bloatware includes Google apps and some small OEM apps and services meant for developers.

The script was developed by XDA member SyCreed for the OnePlus 3 and 3T but it also works for the OnePlus 5. The creator of this script recommends that the script be used right after a fresh install of the Oxygen OS ROM. Also, you must run the debloater script after each OTA update.

Before you go ahead, it is our due diligence to let you know that flashing third-party mods on your device isn’t entirely a safe practice. Even though as long as you know what you’re doing there shouldn’t be a lot to worry about, you must understand that processes like this still carry a fair amount of risk. In any case, DroidViews can not be held responsible for anything that you end up doing to your device.

When your device comes back up, you should notice a lack of apps. Specifically of the ones that you selected in the Aroma debloater.

You may also like: How to Move Chrome Browser Address Bar to the Bottom of Your Screen