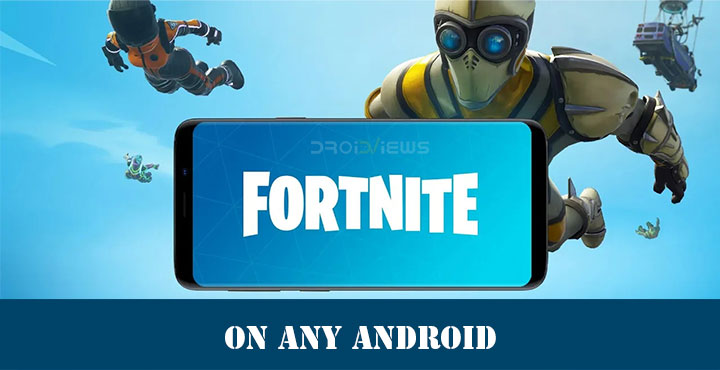 In case you missed it, Samsung unveiled the Galaxy Note 9 at its Unpacked event this year. While it was already known, Samsung’s event confirmed that Fortnite for Android will remain exclusively a Samsung Galaxy Note 9 game for some time. Meanwhile, Fortnite is also available officially as a beta on many other Android devices. Android, as a platform, is a lot larger than an OEM though even if it is Samsung. The exclusivity didn’t last very long, at least the unofficial exclusivity. XDA recognized developer Quinny899 has managed to mod the Fortnite APK to work so that you can play Fortnite on Android devices without any issue.

While that’s exciting news for fans of Fortnite rocking a non-Samsung Android device, there’s also some cause for concern. The modded APK has been signed by Quinny899 and not Epic because that’s how modding works. What this means is that Epic will know when several users are using a modded to access Fortnite. This mod does not contain any cheats or methods that will allow you to cheat, but Epic can still choose to ban your Epic account.

Since Fortnite on Android will not be using the Google Play Store, and thus Google Play Games, an Epic account is your only way to access your game. If you’ve been a Fortnite player on PC you might not want to risk your account. It is recommended that you create another Epic account if you do wish to try out Fortnite on your Android using the modded APK.

Don’t miss: Why do Android Devices Overheat? Here are Some Solutions

As mentioned, Fortnite is also available for devices other than the Galaxy Note 9 in beta form. The beta version is official and hence, safe to use on supported devices. It might be a good idea to make sure your device doesn’t support the official beta before installing the modded APK version and risking your account.

Below is the official list of devices released by Epic games that the Android Beta currently works on:

Currently unsupported, working on fixes in the near term:

The only requirements to get the modded APK installed and working on your Android device is that your device must have an ARM64 architecture. In other words, it should support the 64-bit architecture, which is true for most newer Android devices. If your device does meet that requirement, you’ll have to enable Unknown sources under Settings > Security in order to install the APK. If your device is running Android 8.0 Oreo or higher, the Unknown sources setting won’t be there. In that case, you can follow this link in order to get your device ready to install third-party APKs.

The developer, Kieron Quinn, has made a couple of APKs available for you to download. The links are available at this XDA thread. Visit the link and download any of the APKs and you’ll be redirected to the MEGA file hosting website. Tap on the Open in browser button and wait for the download to complete. Once complete, tap OK on your browser and then tap OPEN.

Fortnite has just launched on Android and as is the case with any such game launches on Android, Epic’s servers are pretty overloaded. You may have to wait for a little on the initial downloading screen or may have to retry a couple of times. Once the download is complete though everything should work as expected. Play Fortnite on Android and let us know if the method given above worked for you.

Must read: 20 build.prop Tweaks to Customize Your Android in Awesome Ways