Admit it, even though you all are hardcore Android fans because of the operating system’s customization capabilities from head to toe, flexibility, versatility, and more importantly open source nature, you always wanted to try out bits and pieces of features from rival operating systems namely Apple’s iOS and Microsoft’s Windows Phone. Speaking of Windows Phone, I just remembered that the operating system is obsolete at the moment as the support period has ended. OK, let me come back to the main topic here, the customization Android offers is virtually endless from changing your home screen looks, adding new icon packs, changing various user interface elements and so so much more, I can go on and on. If you want to get iOS 11 Control Center on your Android device, what I have for you today is an app called Control Center OS 11 made by a developer that goes by the name LuuTinh Developer

This above-mentioned app does bring the new Control Center found in iOS 11 on Apple’s iPhone and other iDevices. As you all may know that Apple has done pretty significant changes in the way the Control Center looks, feels and operates in its eleventh iteration of the operating system. Now join me to take a look at Control Center OS 11 and go through its features.

Must Read: 5 Instagram Tips and Tricks You Should Know

After downloading the app and installing it, launch the app and after the introduction, you will be taken to the main page from where you can change various settings such as size, color, position, background and add your favorite apps to the control center to which I will come to in a minute.

Don’t Miss: How to Enable Android Nougat 7.1.1 Like Shortcuts on Any Phone

So that is it my friends on how to get iOS 11 like Control Center on any Android device. Moreover, there is no doubt that at the moment Android’s notification shade coupled with Quick Settings toggles are the best in my opinion, though your opinion, likes and dislikes may differ from mine. In spite of Android’s unmatched capabilities over the other two competing or rival platforms as I mentioned at the start of this article, we all have that thing in us which makes us want to try features from those platforms so that we could have best of both or let’s say all the three worlds.

Considering Android’s as I mentioned “unmatched capabilities” and its wonderful open source nature, why not make the most out of this golden opportunity. Head over to the Google Play Store to download this app via the link given below. Feel free to chime in the comments on your experience with the app and your general thoughts about it. Adios amigos! 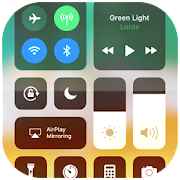