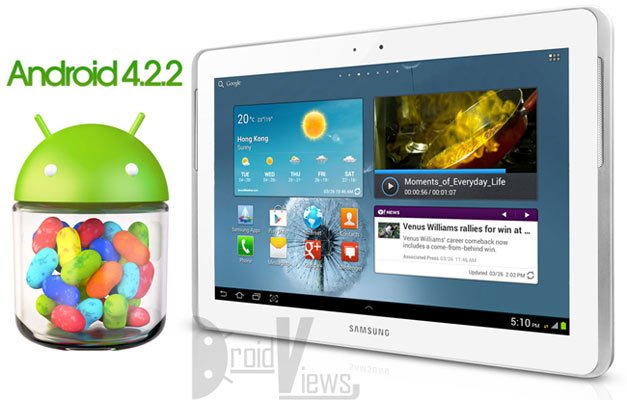 For the past few weeks, Samsung has been busy with sending Android 4.2.2 Jelly Bean update to a number of devices like Galaxy Grand, Tab 2 7.0, Note 8.0, Galaxy S2 Plus and some others too. The Android 4.2.2 update has now made its way to another device. If you have the 3G+WiFi version of the Samsung Galaxy Tab 2 10.1 with model number GT-P5100, it”s now your turn to enjoy an all-new version of Android with TouchWiz topping. The new firmware with baseband version XXDMH1 has finally started rolling out to the users of Galaxy Tab 2 10.1 GT-P5100 in France.

The update is already being pushed via Samsung Kies and on-device OTA update feature. We would like to tell our users that though this firmware is meant for the users of the device in France, it can be installed on any unbranded Tab 2 10.1 GT-P5100 whether you belong to France or some other part of the globe.

If you own this second generation of the tablet device with 10.1″ screen, you can now enjoy a host of new features and improvements on it. The Android 4.2.2 Jelly Bean firmware update for GT-P5100 brings some nice features with it. Here are a few of them:

If you wish to get this update on your Galaxy Tab 2 10.1 (3G+WiFi) GT-P5100, download the firmware file from below and install it manually. We will keep adding new firmwares for other countries too as they arrive.

You can find the detailed instructions to install this firmware here. Having updated your tablet to this firmware, do not forget to share your experience with us. Thanks!