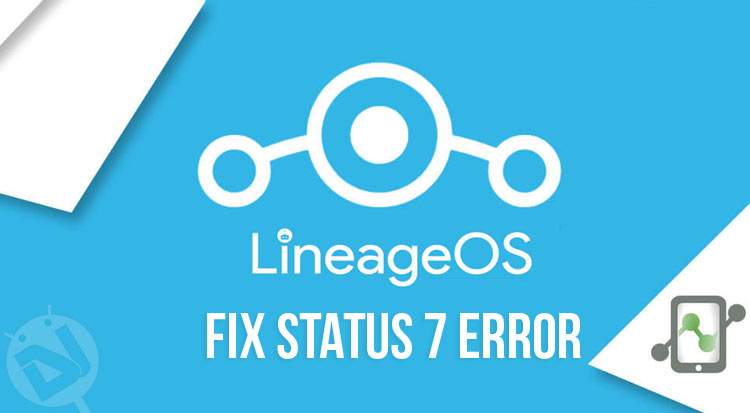 In case of not living under the rock for the past few weeks, then you know that CyanogenMod is gone. This should mean that you have to forget all about it; however, don’t you think that it is gone for good! The Cyanogen Inc. company that we all know did reach the end of its road and shut down all operations for the project, but despite that, Lineage is here to take its place and keep the spirit of CyanogenMod alive. So, those great ideas behind CM aren’t at all gone, but not everything is perfect and this new Status 7 Error tries to ruin all the fun.

Yes, the most recent version has been released and updated to the current Android Security Bulletin patches, and mountains of source code are currently forked into something fresh and exciting: the Lineage Android Distribution. The thrill is in the air and everyone is talking about it these days! With this new name, I can only hope that the Cyanogen team would step towards a brighter future and higher popularity (not that the previous CyanogenMod was not popular) and that problems such as the Status 7 Error are isolated cases!

The team is working hard to bring both official and unofficial Lineage OS builds for more and more Android handsets, but your presence here makes me think of something else. So, let me pop up the big question. No, it’s not about butterflies, rainbows and church bells for a big wedding, but I am thinking of something else, much more earthly for those of you out there who have a habit of experimenting: have you also faced the Status 7 Error while trying to install the Lineage OS?

This isn’t a good sign – you know it and I can confirm it too, but you aren’t alone into this, so let’s understand what brought you in this precise situation and see what you can do in order to fix the problem.

As developers themselves claim, it seems that there are some possible reasons for getting the Error 7 while installing the Lineage OS ROM. The Lineage OS you’re trying to flash might not be appropriate for your device. So, make sure that there is no confusion at this chapter.

There are also cases when you’ll see a Trustzone error in the TWRP/CWM before the Error 7. This means that you simply have to upgrade your bootloader before installing the ROM. And yes, you’ll get the very same Status 7 Error when you’re not properly flashing the ROM while migrating from a different ROM.

What can you do to solve such problems? Use this first method only when you’re sure that you’ve downloaded the appropriate ROM. This operation here described bypasses assert checks in recovery so that you can further install the ROM without any other issues.

Do you see a trust zone error in the recovery while flashing Lineage OS? Then, I have a different suggestion for you.

Well, this problem is most probably caused by an outdated bootloader. Therefore, to keep things short, you need to upgrade your bootloader before even thinking that you can install Lineage OS. For example, if you’re running Lollipop and trying to install the new Lineage OS 14.1, then you cannot succeed. Let me just remind you that the bootloader should support Nougat based ROMs.

You might also receive this Error 7 if you’re not properly migrating from other ROMs. So, if you’re on CM ROM and you want to get a taste of Lineage OS, you should better take all the necessary precautions for that. I know that dirty flashing is fast, and yet far from the solution that keeps you out of trouble. In such conditions, I strongly warn you against that.

And let’s just say that it’s your lucky day and you will not get this error during the installation. Do you really think that things will remain this way forever? This might cause a severe battery drain, wake locks, and even force closes at a later point. So, why taking such chances in the first place?

That was about all for now! Don’t hesitate to drop your comments and questions about Lineage OS Android below. I will do my best to reach out to you with a working solution as soon as possible!