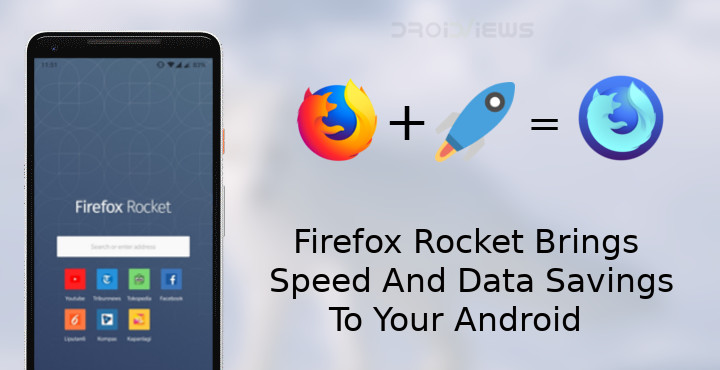 Those of you who have lived long enough will remember Mozilla Firefox (actually, it hasn’t been that long). Firefox was once the internet browser to compete against. It brought something to browsers that nobody thought of before. And if you remember how amazing Internet Explorer used to be you will appreciate what Firefox did. It’s fast-growing market led Google to jump in with its own take on what a browser should be. Chrome is now the undisputed king and this is a story we’ve all seen happen and been a part of. Mozilla hasn’t given up though and the company is back with a brand new browser for Android called Firefox Lite.

The mobile browser landscape is pretty different from that of the desktop where Firefox is a distant second choice. On smartphones, Firefox is not even a distant third even though Firefox for Android is a pretty decent browser. It is one of the few browsers which support extensions on Android and there are plenty of those for Firefox. Mozilla also has another browser on Android called Firefox focus which was developed with user privacy in mind. We’ve reviewed an older version of Firefox focus back when it came out. Today we’re here to talk about Firefox Lite though. With Firefox Lite, Mozilla perhaps hopes to win new users instead of trying to convert Chrome users.

Firefox Lite has been designed for low-end phones with less storage and less RAM. This is basically Mozilla Firefox for Android Go devices. It’s light-weight, it’s fast, and it costs you fewer data. Many companies are making a lite version of their apps these days to find their way onto cheaper smartphones. Facebook has done it, Google has done it, Microsoft has done it and now it’s Mozilla. If you’ve noticed though many of these “lite” apps turn out to be better than the original. You do have to give up a few things in the process but it can be really worth it. I can mention Messenger Lite as a very good example but is Firefox Lite good enough?

How good is it?

Compared to Firefox for Android which is at the moment 38.28 MB in size, Firefox Lite is a meager 2.49 MB. It features most of the common features you’d expect out of your browser such as multiple tabs, bookmarks, history, etc. On the flip side, it cuts down on fancy tab previews, and extensions, compared to the original app. There’s not even an Incognito/Private mode or Find in page functionality. You also cannot sync your browsing history, bookmarks, or anything between devices. I suppose at this point you’ve given up any hopes of a dark mode or a night mode because that’s not here either.

On the bright side, The interface is pretty minimal and gets out of your way. There’s a pretty handy screenshot tool built-in and accessible easily from the bottom toolbar. All you have to do is tap on the screenshot button and the browser will capture the entire webpage as a screenshot. No need to scroll or watch it scroll down or anything, it just happens. This is something that the original app could make use of. Tapping on the three-dot menu button also gives you the option to Clear cache right from the browser which is again handy. You can block images for faster browsing and cut down on your data usage. Furthermore, a Turbo mode is present which blocks all third-party scripts and content such as ads, thus making for a faster browser overall.

It’s understandable that a Lite version of the app cannot be expected to be as feature packed as the original. Messenger Lite cuts down on some features too. Features such as Games, GIFs, video calling, stuff that’s not very essential to texting. You can still share that funny meme you found, just not in bulk. Firefox Lite, however, asks users to trade off quite a lot for the speed. It’s undeniably faster, and better than the original Firefox or even Chrome when it comes to actual browsing. The lack of a private or Incognito mode can be a deal breaker though. It is definitely not quite up there to be your primary browser just yet but it’s almost there. We’d also love to see a built-in dark mode because all that white is … so white.

If you are interested in trying it out you can follow the Play Store link above and install it. Unless you live in Indonesia though you’ll most probably be told that the app isn’t available in your country. Mozilla is currently testing the browser in the country and will perhaps soon launch it in the global market.

Update: Firefox Lite has been rebranded as “Firefox Lite” and is now available on the Google Play Store.