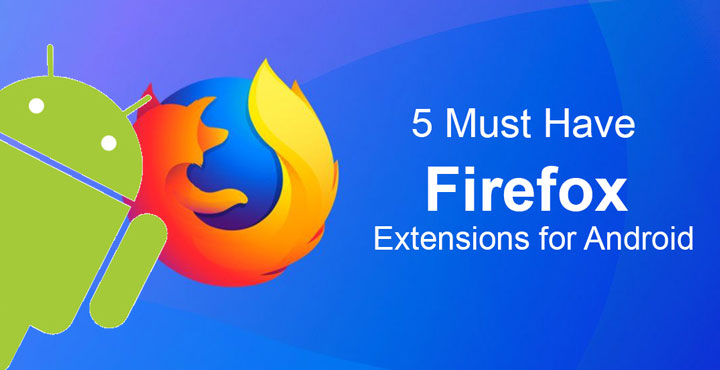 Firefox is one of the most popular web browsers for smartphone and desktop devices. Here are some great Firefox extensions for Android that I think you must have to make the most of Firefox for Android.

Firefox has made a few headlines with the release of their new and improved web browser Firefox Quantum. The new Firefox, on the PC, is significantly faster than the old one and even faster than Chrome. You click on it and its open. Chrome needs to always run in the background to be that quick. Firefox also uses at the most half as many resources as Chrome. If you use Firefox on the PC, you might want to use it on your Android to keep your history and bookmarks synced.

Firefox on Android also has had a makeover with the new Photon UI. The best of Quantum has yet to arrive on Android but Firefox 57 still is quite an improvement over the previous version. The best part about Firefox has always been extensions though.

Remember the old days when people used Internet Explorer? Firefox came with this idea of browser extensions and it changed everything. Firefox has brought its extensions onto Android as well. While it’s not the only browser on Android that supports extensions, it is the only one that has a huge enough library of extensions for it to be meaningful. That also means finding the right ones for you is a little more difficult. So here are 5 must-have Firefox extensions for Android that you should install right away.

If you’ve done any Google searches on Firefox for Android you’d know how different the search looks than when it is done using Chrome. If not, just look at the screenshots above. This probably happens because Firefox uses Gecko browser engine instead of Blink, which Chrome and all other popular web browsers on Android use. Google Search Fixer overrides “the user-agent string presented to Google Search pages to receive the search experience shown to Chrome.”

Must Read How to Monitor CPU and GPU Usage on Android

For those concerned about privacy, Firefox already has quite a few features to win you over. But Ghostery takes things a step further. Ghostery “allows you to view and block trackers on websites you browse and anonymizes your data with enhancing anti-tracking technology.” It also blocks ads and speeds up page load times as an added bonus. When installed, you will see a small floating circle near the bottom-right corner of the browser when you visit a website, with a number indicating the number of trackers. You can tap on it to expand it and see more details. You can also click the three-dot menu button and select Ghostery to manage it.

Of course, nobody likes ads, but they’re a necessity for websites like ours. But we do believe it should be a user’s choice whether he or she wants to see ads. If one likes the content on a website he’d most probably want to support it by turning off the adblocker. But in other cases, ads are just annoying especially those pop-ups and redirect ads that lead users away. If you have Ghostery installed, you may want to skip this but not everyone is so concerned about trackers. Adblock Plus needs no introduction. The name says what it does and millions of users will vouch that it does it the best.

One of the best things about browser extensions is you don’t have to depend on the browser developers to add in a feature. There are so many other developers worldwide that are probably on the same page as you. Those that were browsing a website at night and thought, “hey it’s too bright”. Except, in their case, they simply went ahead and created a browser extension to bring night mode to their favorite browser. Simple Night Mode doesn’t necessarily look classy when turned on but it sure helps. Hyperlinks appear in bright green and the background colors are all turned pure black regardless of the website you’re viewing.

I know so many people who have dedicated apps installed on their Android devices just to download YouTube videos. Sure the YouTube app now allows users to download videos but it doesn’t give you the actual file. And the downloads tend to disappear after a while too. Similarly, there are video downloading apps for Facebook too. If you use Firefox you don’t need another app just to download videos from websites. All you need is this extension with a very unusual name. The next time you watch a YouTube video using Firefox, you’ll notice a Download button. Tap on it, select the video quality and it will be downloaded to your Downloads folder. It’s that simple.