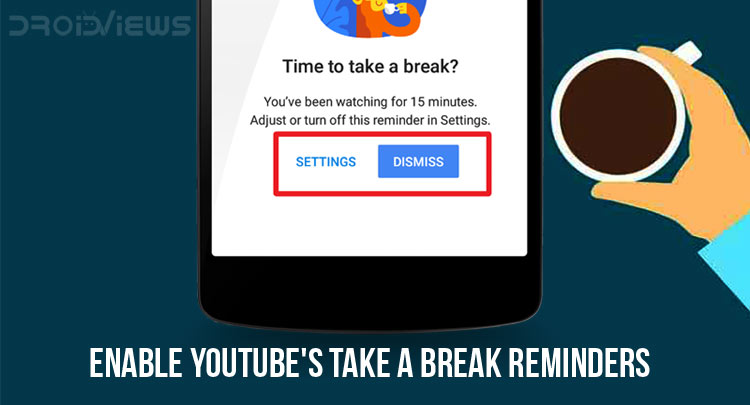 During the I/O 2018, Google introduced their “Digital wellbeing” initiative in the hopes of reducing the time people spend on their smartphones. While most of the features are Android P exclusives at the moment, Google recently released one such feature for YouTube.

Via a back-end update, Google has enabled break reminders in YouTube app to remind to that it’s time to stop bingeing YouTube for hours & make appropriate use of your time. Here’s how to enable YouTube’s Take a Break Reminders.

Step 1: Open the YouTube app on your Android device.

Step 2: Tap your profile picture in the top right-hand corner.

Step 5: Turn on the toggle for “Remind me to take a break”.

When the toggle is turned on, you will see several different frequencies for the reminder. These frequencies vary from five minutes to 24 hours. Once the timer has run out, a pop-up will appear on the screen suggesting that it is time to take a break. Now, you can either take a break or dismiss the pop-up & get back to bingeing.

Honestly, sitting for hours doing nothing but watching pointless videos on YouTube is one of the worst things you can do for your body & your brain. Reminder or not, take a break from bingeing & go outside, get some fresh air & use your time productively.

I, personally, am a big fan of Google’s Digital wellbeing initiative. What do you think about it?

Must read: List of 70 OK Google Commands for Google Assistant and Google Now