Android, as a whole, and its user interface have come a long way since its early days. As of now, it looks way more eye pleasing than it has ever looked; not that it used to look bad in its earlier stages. It was really good as per the UI standards of that time, but, as mentioned above, it was in its earlier stages and it was bound to get better over time. So, here we are, in 2016 and you have to admit that the user interface of Nougat is better than Android’s previous version.

Since a user interface is made up of the combination of various smaller parts and Android allows you to play with or change each of those parts, today I’ll be focusing on one such component that, even though much neglected, is somewhat important for the refinement of the overall user experience.

In this post, I’ll share with you an app that lets you customize the status bar of Android without the need of rooting your device.

Status, by James Fenn, is a status bar replacement app that helps you change the way your existing status bar looks. It works as an overlay on top of the system-generated status bar. What that means is that it won’t actually let you customize your current status bar but replace it with another status bar which is more robust, minimal, material style, and customizable than the default status bar.

If you ever wanted to change the color of status bar or reposition certain element like clock or change the way certain things like battery, network, or WiFi indicator look, then this is the perfect app to do so.

Before installing Status you must know that it requires a lot of permissions in order to work properly and function without any error. For instance, it requires access to notifications, battery and WiFi stats, location service, alarm, etc. All the required permissions are listed on the app description page in the Google play store along with the explanation of why these permissions are required.

After installing the app and granting it access to all the necessary permissions you’ll see the customization options. Before going all into customization, you have to enable the status bar replacement by turning on the toggle on the top right area of the app. Once enabled, you’ll see this new status bar over the old one.

The app is divided into four separate screens or panels, each one containing various customization options. For instance, the first screen i.e. the settings screen, allows you to customize stuff like colors, transparency, animations, notifications, etc. For notifications, you can choose the duration of heads-up notification as well as the way they appear. Swipe left and you get to the second screen. Here you can customize all the contents of the status bar like battery, WiFi, network, clock, notification, Bluetooth, GPS, airplane mode, etc.

Basically, you can customize icons for almost anything that appears on the status bar. For some, you get multiple icon styles to choose from while for some, you got to stick to the default ones; but even they look good and match the overall aesthetics of the replacement status bar. The next screen lets you decide the behavior of the status bar as well as its color for individual apps.

For example, you can set the status bar to look green and visible for the Google play store, or set it as red or invisible for YouTube. And the last screen is just for FAQs in case you face any problem while setting it up (which is highly unlikely) or have any question about the app in general.

So that’s Status. It’s simple to use and looks and feels somewhat elegant. It may feel a bit odd in the beginning but you’ll get used to it eventually. Since it’s certainly not one of kind as there are some other apps that let you customize the status bar (and I found this one to be the best for non-rooted users), which one’s your favorite? 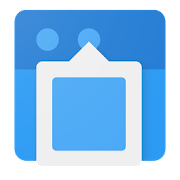 Add Battery Bar to Notch on Android with This Live Wallpaper