Humans are taking billions of photos each day and a lot of it can be attributed to the presence of social media. There’s just something about taking a picture of yourself and showing it off to the world that has captured the imagination of mankind. Now that everyone’s doing it, most people like to add effects, filters, stickers, etc, to their selfies in order to stand out. But nothing stands out more than an animated selfie. And now you can add animations to photos using your Android device easily with Scribbl.

Scribbl gives you a wide variety of tools and lets you draw Scribble/Doodle Animations on your photos! Never post a boring static social media post on Instagram, Snapchat, Facebook or WhatsApp again! You can customize the type of paths you draw, change its properties and apply animation effects from a wide variety of options. Preview the animation and export the video in High Definition.

Scribbl is a new app by axndx that aims to bring life to your static photos, not just selfies. Although, it’s not hard to imagine that selfies are what this app might be used most for. The app does not really animate the photo itself but it lets you draw, or more accurately, scribbl on a photo and you can add animations to your scribblings.

Editor’s Pick: How to Add Timestamp to Photos on Android

Under uninspired fingers, the app is nothing more than a few moments of fun. The right, creative fingers can create a whole new level of animated art with it as is evident from the app’s home page.

How to add animations to photos with Scribbl

Launch the Scribble app once installed. As mentioned earlier, the homepage showcases the works of other people using the app. It’s really nice to have that for some inspiration. However, it would’ve been better if you could just tap on one of those animated photos and add the exact animation to one of your photos. But you can’t, yet, so tap on the add (+) button in the bottom right. 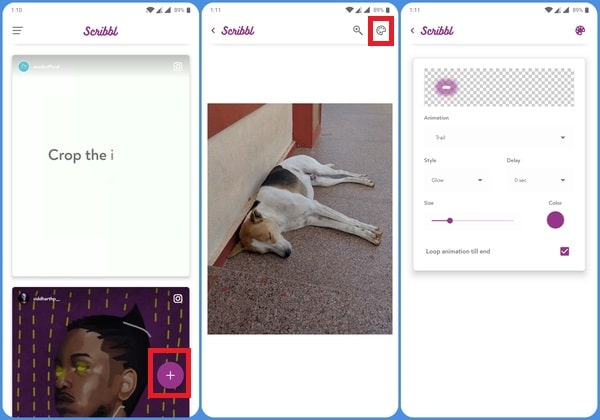 You can then choose an image on your device or even any of your cloud services. Once the image is selected, you can start drawing or scribbling but don’t yet. Tap on the palette icon in the top right and configure the kind of animation you want.

In the Animation drop-down menu, you’ll find options: Static, Blink, Rotate (Pro), Beat, Move (Pro) Fill, To and fro, Trail, Wiggle, and Jitter (Pro). Out of these, some animations (marked as Pro) are available only after you make a one-time payment of $5.49 (₹299) or purchase a  subscription of $0.99 (₹49) per month. Below that are options to change the style of the scribbl, the delay after which it appears on the image, thickness, and color. All of it can be previewed in the small window at the top as and how you change the configurations.

Unless you want a particular scribbl to disappear after its animation is over, also check the Loop animation till end option at the bottom. When you’re ready, go back and scribble on the photo. When you want something animated differently, change the configuration accordingly before drawing it. This way you can have multiple things on the photo animated in different ways. 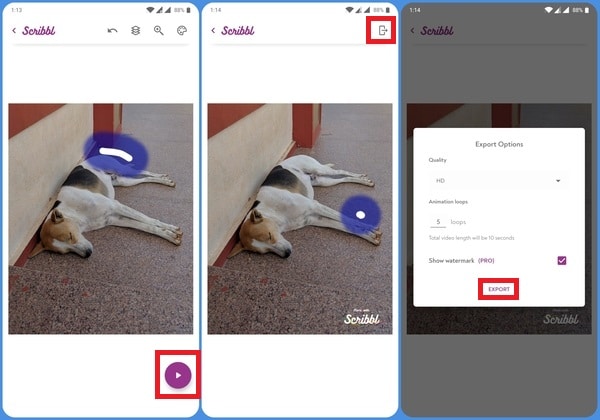 Your work can be previewed by pressing the floating play button in the bottom right. You can choose to go back and edit it more but if you’re satisfied with what you’ve created, tap on the export button at the top right. The app saves the animated photo as an HD video by default but you can choose SD or FHD options. You can decide how many times the video will loop before it ends. Keep in mind that the more times you make it loop, the longer the video will be and hence the larger the file size will be too. Pro users can also remove the watermark.

It would’ve been nice to have the option to save the animation as a GIF instead of a video since GIFs are easier to share. The app is still very new so we can probably expect future updates to add this feature. Meanwhile, below is my animated creation for some inspiration, although it isn’t very inspiring.