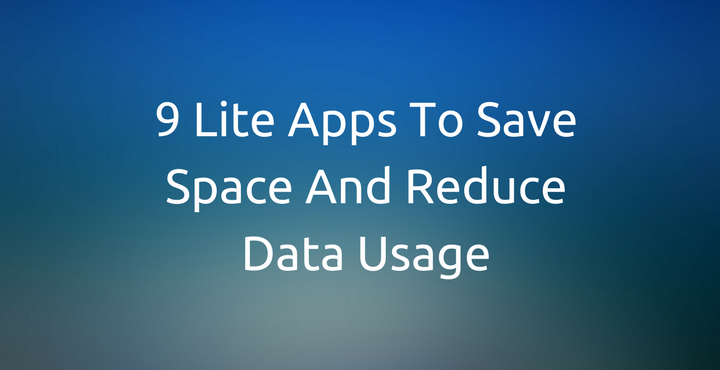 If you want to save space on your phone and reduce its data usage on Android, here are some of the best lite apps to help you do that. These are 9 lightweight alternatives to some of the most popular Android apps and their names won’t surprise you.

In developing countries like India, the network speeds leave a lot to be desired for. Can you believe that more than 70% of smartphones sold in India are budget smartphones? These phones may not provide ideal smartphone experience at all times and when it comes to resource-hungry apps like Facebook, the experience is mediocre.

All the big tech companies know of the existence of this problem and they are slowly starting to respond by making lightweight alternatives of their products and services. Known as Lite apps, these are stripped down, less fancy versions of the big apps. They do not consume much space, do not use much data and also goes light on your smartphone’s resources.

Do keep in mind that there is a downside to these lite apps such as many fancy features and option will not be made available in them but, your phone will stay relatively fast.

9 Best Lite Apps to Save Space and Reduce Data Usage

When it comes to eating the system resource on a smartphone, nothing can beat Facebook. Facebook Lite was made with developing countries in mind where 2G networks are still widely used. The app is extremely light, takes very little space and relatively faster on even slower networks. All the basic features of the Facebook app are available on Facebook Lite.

Facebook was extremely aggressive in promoting its messenger platform. What was initially a feature inside the mainstream Facebook app was made into a separate app. As with any change, the users absolutely hated it and got used to it gradually. Facebook launched Messenger Lite just about a month ago and it is already available in over 120 countries. So, if you think Messenger in your phone is eating too much of system resources, do give this one a shot.

Must read: How to Limit Data Usage on Facebook and WhatsApp

Love taking pictures/selfies but have a slow phone? Fret not, Camera360 Lite has got you covered. Camera360 Lite is a full-featured beauty camera app for Android. The app is just 4 MB in size which is remarkable considering the functionality is provides.

Google launched YouTube Go especially for India. It is a dumbed down version of the feature-rich, heavy YouTube app. The main motto of this app is reducing the data consumption. All the videos will have the information about the amount data that it will take to stream/save it offline. There are options to view/save the low-resolution version of a particular video. There is also an option for previewing the video before playing among many other interesting features.

Don’t miss: 10 Facebook Messenger Tips and Tricks You Must Check Out

Be it mobile or desktop, Chrome is one among the top programs that take up a lot of physical memory. The OEM browsers that come pre-installed with the phone are no different either. Opera Mini is kind of a legend in this area. I still remember using it in my old S60/S40 based Nokia phones. Opera Mini has come a long way since then and it’s now optimized to work on the smartphones as well. I kind of love how they kept the original look of the app even after these many years. No matter what your network connection speed is, Opera Mini will deliver. If this can’t, I seriously doubt whether anything else will.

Skype is probably the most widely used video calling app on the planet. I am not so sure about those words right now as WhatsApp has introduced video calls as well. Anyhow, following many other tech giants, Microsoft also doesn’t want to leave behind its users in developing countries. The app is just 13 MB in size and is optimized to work well on even 2G networks. Good job, Microsoft. It can also run smoothly on old Android phones running older versions of Android and it consumes way less battery than it’s bigger brother.

Almost all the gallery apps that come pre-installed on the phones are slow and takes a lot of space. If you are looking for a gallery app that is fast and just works, look no further – grab the Simple Gallery right away!

I am sure there are still many more Lite replacements out there. But are all of them good, I am not sure. What is your favorite light app? Which app do you absolutely hate for eating up all your system resources? Let us know in the comments below!