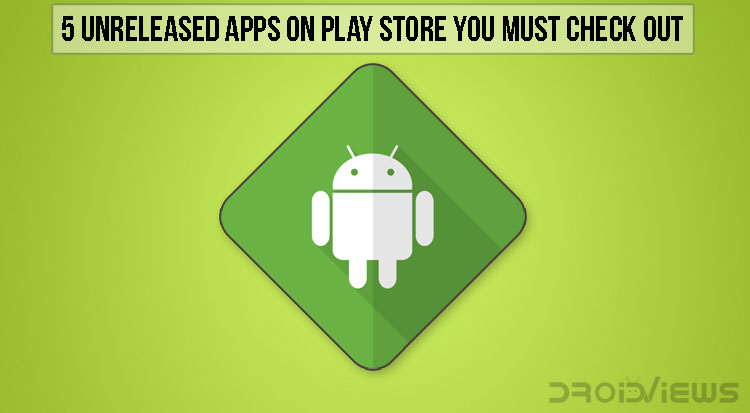 Every day the Google Play Store becomes home to several new apps. In terms of sheer numbers, the Play Store is the largest app market on the planet on any platform. This results partly from Google trying to make their platform easier to develop apps for. Today, we’ll be sharing 5 unreleased Android apps that you can download from the Google Play Store.

In its efforts towards that goal, Google allows app developers to release their underdevelopment apps on the Play Store as well. This gives these apps the exposure they’d need and the developers a chance to conduct large-scale beta testings. This, in turn, allows enthusiastic users a chance to try new apps and games before they officially get launched. Essentially, everyone wins. We’ve recommended some under development apps before on DroidViews. Today we’ll take a look at 5 such unreleased apps again.

If you’re someone who relies on online sources such as Reddit, Hacker News, Medium, etc for your news Catch up may interest you. It may look so at first but this is not a Super app that will replace individual apps for these sources on your phone. We wish, but it is far from it, in fact. Catch up will only display stories and posts from a website’s front page. Since it does not require you to link your Reddit, Medium or any accounts at all or even create any there is no way to personalize your feed. And that’s a bummer but the first line on the app’s Play Store page reads, “CatchUp is open source, multi-service “front page” app…”

The app never promises to be what it could’ve been. You can tap on any of the links to open them within the app or launch them in the respective app if installed on your device. Each source feed colors the interface with a different color. Apart from gathering the front-page feeds from these various different sources in one place, there’s not a lot with this one.

Having actually tried a number of unreleased launcher apps before, I was expecting Flick Launcher to be something similar. A brand new concept that looks to differentiate itself from others, which ultimately fails or something really basic and unappealing. For better or worse, Flick Launcher is neither trying on a new concept nor is it something really basic. It still does manage to stand out though. Were it not for a few bugs here and there it’d be hard to believe this is an unreleased app.

Flick Launcher packs in so much it can get a little confusing for novice users. If I had to make a bold statement I’d say it has many more features than Nova Launcher and they’re not features you can ignore. Features like locking apps and folders with fingerprints or passwords, custom actions based on proximity sensor readings, make it stand out. But by far my favorite thing about this launcher is adding blur to the app drawer background. It’s dope. There are a ton of other things that can’t possibly all be mentioned here.

Changes is yet another unreleased Android app at the Play Store that we recommend using. This app has been under development for a long time now. I’ve known about it for a while but it wasn’t until I tried it that I realized it’s better than it sounds. To put it simply, Changes tracks updates for all the apps installed on your phone and displays all the information you may need at one single place. When you first launch the app, it builds up the list collecting information about recent app updates. Not that I did a scientific test or anything but it tracks the updates back to almost two months.

You can see which apps got updated when along with a list of changes. This is a functionality that the Google Play Store should have had but at least somebody made an app for it. I remember there was a time when app updates used to excite me because they brought in something new. These days it is usually the usual – bug fixes, improvements, blah blah – but Changes, changes that. Well, not that exactly, but it sort of brings that excitement back, to an extent.

You may have come across the gallery app called Focus. It’s a nice app and has quite a lot of features, some of which might not really be that useful. Perhaps the developer recognized that which is why he went back to the drawing board to “restructure” his entire app based on Focus Go. This makes Focus Go, in a way a Lite version of Focus, as it will be in the future. Enough on the app that this is not about, let’s talk about Focus Go now. It’s a simple app which you’d probably guess from the name if you’ve not been living under a rock. Google has been riding the Go branding quite hard recently (Android Go, Youtube Go, Files Go, Google Go, etc).

It offers three different viewing modes which are Expanded, Default – which you can see in the screenshot above –  and Compact. The names are quite self-explanatory. If you tap on the three-dot menu button, you can enable 32-bit pictures which will juice your battery a bit. There is also an extension available to install but all it apparently does is extract a color palette from an image. Could be useful if you do a lot of photo editing. Other than that the app is so basic that you can’t even select multiple images let alone delete or share them.

InstLife another unreleased Android app to check out. It isn’t really an app but a game, although technically a game is but a graphics-intensive, fun app. Technicalities. But regardless, InstLife is actually interesting, maybe more so than any of the apps above. It’s more like an old-school text-based life simulation game that some of you may have played once upon a time.

Unlike some fancier looking simulation games InstLife’s complete focus is on simulating life rather than presenting it in a visually impressive package. This makes the actual simulation more lifelike, but text-based if that makes sense. What I mean to say is that the possibilities here are, I don’t want to say endless, but it’s probably close. I obviously haven’t played the game long enough to find out. Try these unreleased Android apps now!