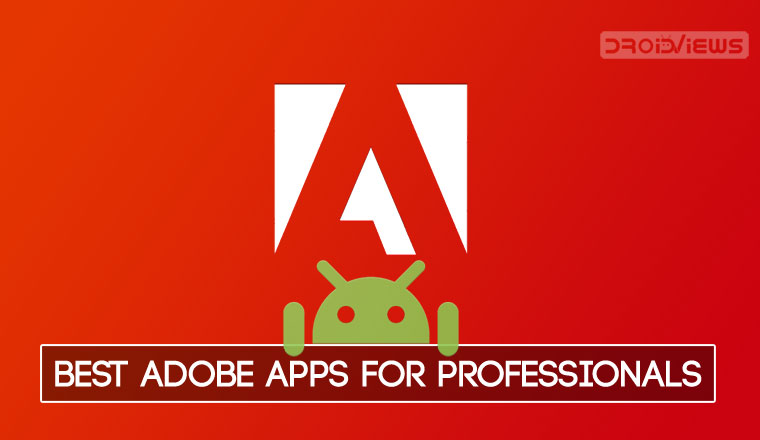 Adobe is best known for its software services targeted at creative professionals but the company is also about non-creative professionals. The company is one of the most popular developers of mobile apps as well on both Android and iOS. Not all of their mobile apps are as popularly known as their desktop counterparts though. A big reason for this is that there is far more competition in the mobile space. Here are some Adobe Android apps you must have if you’re a professional.

PDF is the go-to format for storing and sharing documents digitally and guess who developed it. Now that everyone has a smartphone with a capable camera, people have also been using the camera to take pictures of documents. App developers including Adobe realized the potential here and developed apps to help users scan documents using the camera on their smartphones. Adobe Scan is one of the best Adobe Android apps and advertises itself as a powerful and portable PDF scanner.

No, it doesn’t scan only PDF files but it stores scanned documents directly in the PDF format and thus is a PDF scanner. It can recognize most of the documents you try to scan such as business cards and whiteboard scribblings. These built-in smart utilities make the process less cumbersome. So all you have to do is point your phone to a document and let Adobe Scan work its magic. The app does all the required processing automatically. You can manually adjust the captured image too with built-in cropping tools as well as filters for enhancing its clarity.

There is also the option to add more scans and stitch them together to create a new PDF.

Spark Post is another one of the best Adobe Android apps for professionals. Before smartphones, editing photos was a job mostly left to the professionals or to those with some knowledge of Adobe Photoshop. Mobile apps have made it a lot easier to edit photos and achieve all kinds of result with a few taps. Adobe Spark Post does something similar by making graphic design easier than it would be on a desktop. Like most Adobe Android Apps, it is targeted towards professionals. But you don’t get as much control or precision but that’s what you’d expect from a mobile app.

The app features an endless range of templates you can instantly modify to suit your preferences and campaigns. You can also adjust individual elements manually, thus, create custom templates of your own. If you’re looking to create some advanced grade marketing material but don’t have the know-how, this is the app for you.

Recommended for you: Top Android Apps for Mobile Photography

Adobe Capture CC is one of the best Adobe Android apps. It’s a peculiar app in that it’s one of a kind. It’s a camera app that lets you convert real-world objects into digital patterns. It does this by letting users fetch or form patterns, colors, and more from scenes through the camera viewfinder. For instance, when you discover a beautiful flower with a color you love and might want to use in any of your digital creations, you can simply point your camera at the flower and reproduce its color digitally.

Not just that, you can even capture your dog’s fur and turn it into a digital pattern that you use for a wallpaper or something else. Since you’ve probably never used an app quite like it, it does take some time to learn, like almost any Adobe app. Once you’ve figured out how it works there is a lot you can do with Adobe Capture CC. This includes replicating typography.

This is the age of digitization and everything from your photos to your documents is digitized today. Document sharing has also become a lot easier due to that and smartphones. If you’re someone who regularly signs and edits fill PDF documents on the go using your smartphone, you’ll love Adobe Fill & Sign. Amongst the list of Adobe Android apps, this one targests probably the most niche audience. The app contains a bevy of features that let you to quickly add text to forms and sign documents. You can not only import PDF files but also images and you can even take pictures right within the app.

Don’t Miss: Get Edge Lighting Border Around Screen on Any Android

Once processed, it will let you overlay the fields with text boxes and type in whatever you want. There are also other options like changing the text size and the ability to input in boxes instead of a single string. You can even put in ticks and crosses for checkboxes. It even learns from you and will start suggesting common entries like your name, address, etc. once you’ve filled a few forms.

There are plenty of video editing apps on the Google Play Store, and so Adobe didn’t want to be left behind. Adobe Premiere Clip is a stripped-down counterpart to Adobe Premiere Pro. The app has a wealth of top-quality features. You can auto-generate videos using images as well as adding video and editing using multiple tools. It has the standard mobile video editor features allowing you to add music tracks and other effects.

Should you have an Adobe Creative Cloud account, your projects are also synced across devices, including syncing to Adobe Premiere Pro on the desktop. The app isn’t as simple to use as something like Quik, but in its complexity, you’ll find some similarities with Adobe Premiere Pro. That can be a good thing for those of you who use it on the desktop. For those who’ve never used a desktop video editor before, the app will have a slight learning curve.