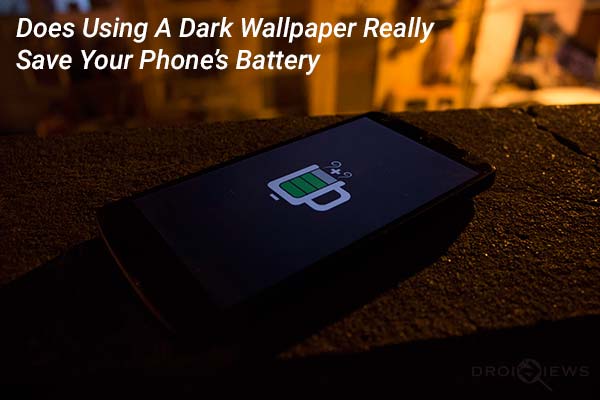 Its a questions of great concern for every Android user, since its connected to our phone’s battery life. A majority of crowd out there just grabs everything they hear, tipping them on how to increase their Android phone’s battery life. But they do it without actually knowing the logic behind it, which is a bad practice. You shouldn’t just follow what you hear, you should ask for it, which will not only prove it useful but also help you improvise on your knowledge.

So today lets ask “Does using Dark wallpapers really save phone’s battery?”. Does it really influence your Android’s battery or is it just a myth which isn’t relevant. Let us discuss below the reliability of this fact and whether it should be followed or not.

To start off, there are two types of displays that are widely used in the smartphone market, irrespective of the manufacturer. These are – AMOLED and LCD. Having read a lot recently, and i really mean a lot, I have collected a few precise facts about both of them, which will clear out all your doubts and assumptions till date.

Known as Liquid Crystal Display, these are the most widely used displays among smartphones, gaming consoles, and monitors etc. LCD was the perfect game changer when it came to screens. Since the screen is built with liquid crystals which are activated upon light applying electric current. The light emissions in an LCD screen are almost similar in case of any color. The fact that we are taking into consideration today is not so true when it comes to LCD.

Why? LCD screens generate white color every time the screen liquid crystals are activated.by the transmitted light, which is a regular phenomenon. But to generate black color, the light transmission has to be block to the required level, and hence it consumes more power. To be accurate, a black color emission consumes 6% more power than white, in case of LCD. So, if you change your LCD-based device’s background to black, it wouldn’t effect. However, reducing the overall screen brightness shall definitely prove useful. Devices like Nexus 5, LG G3, and Xperia Z3 are some popular Android smartphones consisting of an IPS LCD screen and using black/dark wallpapers on these devices won’t affect anything.

While LCDs are still considered to be more power consuming, new and improved technologies have taken over which will be discussed below.

It is in short for Active-Matrix Organic Light Emitting Diode. AMOLED are enhanced OLED screens designed majorly for smartphones, which are based on the concept of LCD, that have proved to be the turning point in the market. These screens are more intelligent and unlike the LCD, they do not tend to activate the complete screen upon demand, rather selective pixels are activated to produce the required image on the screen. Each pixel acts as an individual LED and therefore quite an amount of energy and LED life are saved.

Lets understand how dark wallpapers really save battery life on AMOLED based smartphones. These type of displays does not contain any back-light as those in LCD, instead a layer of sub-pixels is present. Therefore the complete screen is never activated at all times, until and unless it is required to. Setting a dark/black wallpaper on such screens would not required any pixels to lighten up and since the pixels are already turned off, a lot less energy is consumed. And hence, less energy turns to give out less battery consumption.

The fact is both, right and wrong. Right for users of phones having smartphones with AMOLED screens and wrong for those with LCD. Therefore, using dark themes and wallpapers on AMOLED screens will definitely push your smartphone’s battery life a bit, but using the same on an LCD screen would have a close-to-none effect. I personally have a Nexus 5 and Nexus 4, both of which have an IPS LCD display, so using any sort of black display would not effect me and my devices. But if you have a smartphone or tablet with an AMOLED screen, you may prefer using these to preserve battery life to an extent.