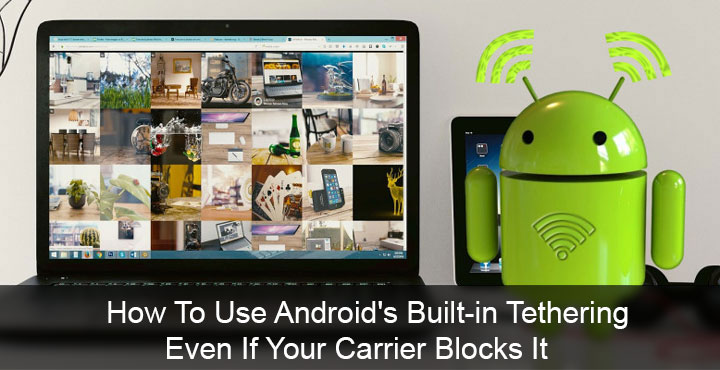 While it is not a problem in most parts of the world, sharing your data connection is not as simple or free in some parts such as the United States. Being able to tether your phone’s internet when you’re out somewhere with no Wi-Fi can be a lifesaver. But some carriers block this feature, which is available on every Android phone if you buy your phone directly from them. Carriers, in general, expect to be paid an additional fee if you want to use your phone’s data connection to access the Internet from a laptop, tablet, or another device. If you get an error message when trying to tether that says “Account not set up for tethering” it means your carrier has blocked it.

You have a few options for bypassing the carrier block and one of them includes using a third-party app. A single third-party app does not always work on every phone. Even if it does work now, it might not continue to in the future. Clearly, this is not an ideal solution, but if your device is not rooted, third-party apps are your only choice.

FoxFi happens to be a pretty popular app for tethering. However, AT&T and Sprint have both blocked the app from showing on the Google Play Store on their networks. If you’re on an AT&T or Sprint network you might have to install FoxFi (Sprint/AT&T only). The app is the same but is a different listing on the Play Store so it isn’t blocked, yet. According to the developers of FoxFi, these carriers should not be able to block the second listing “due to the latest FCC tether rules.”

Must read: How to Control Android Devices with Text Messages

The app is pretty simple to use as well. Just open it and enable the Activate WiFi Hotspot checkbox. Choose a network name (SSID) and password for your WiFi hotspot. You should then be able to connect to the Wi-Fi network from your laptop, tablet, or any other Wi-Fi-enabled device. FoxFi’s Play Store page has information specific to different carriers, phones, and Android versions in case you encounter any problems.

The app works quite similar to FoxFi and even looks the same with that old school UI design from Android’s Gingerbread days.

If you have a rooted device, you have a much better option: re-enable Android’s built-in tethering. You have a couple of options as to how to do it as well. If you use the Xposed Framework, which is a must for every Android user with a rooted device, you can use a simple Xposed module. Xposed is not available for devices running Android 7.0 Nougat or above, however, at least not officially. Luckily, there is an even better option if you have rooted your device with the Magisk systemless framework. Magisk is available for almost all Android devices and it does not even trip the SafetyNet check, unlike Xposed.

When the module is installed, you will see a notification asking you to activate it. Tap on ACTIVATE AND REBOOT on the notification or manually activate the module by going to the Modules section on the Xposed Installer app and reboot. When your phone comes back up, you should be able to tether your mobile data using the built-in hotspot features of your Android device.

Like with Xposed modules, you’ll need to head to the Modules section of the Magisk Manager app and activate the module. Once activated, reboot your device and you’re done.

Once you’ve re-enabled it, you can create a WiFi hotspot with your device to use your mobile data connection.For those who’ve never done it before, you can do so by heading to Settings > More > Tethering & portable hotspot. Here, you can set up the network SSID and password and then enable it with a simple toggle.

You may also like: Everything You Need to Know about Malware on Android