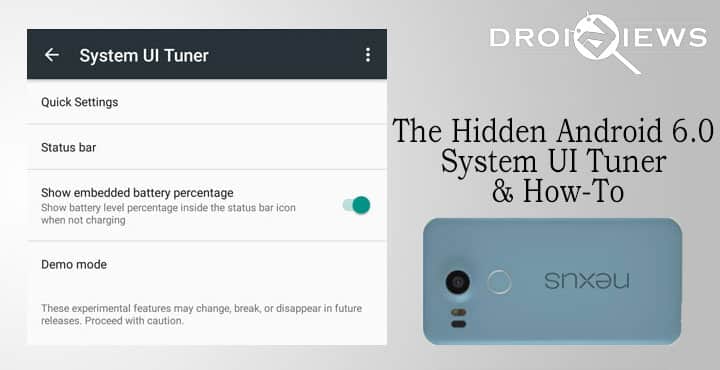 Android is learning from custom ROMs, and fast at that. It now allows users to customize the shortcuts that appear in the Quick Settings & icons in the status bar. This is part of the almost hidden System UI Tuner present in the Android 6.0 Marshmallow. You wouldn’t locate it unless someone told you about it- just like the Developer options or the Android’s hidden version art.

How to enable System UI Tuner:

To enable/display the feature, swipe down the notification bar of your Android device & long-press the gear icon situated between the battery indicator & profile image of the user. This press is around 5 seconds. It should then begin to spin & a notification appears saying “Congrats! System UI Tuner has been added to Settings.”

How to access the System UI Tuner [after 1st use]:

Once enabled, a new setting item shall appear in the Android System Settings apps. Scrolling down, you shall find a new option below About Phone / About Tablet named ‘System UI Tuner’. Tap it to enter the menu.

On opening the app, you’ll be prompted that this feature is “Fun for some but not for all.” As per Google, “these experimental features may change, break or disappear in future releases. Proceed with caution.” This could be basically because the feature is still in a beta phase and could later become a full-fledged feature available for all.

As discussed earlier, this is the very first release & hence the features under here are quite limited. On first look, the menu looks almost blank except for 4 items appearing on the top.  It can be used for:

Some screen shots below from the Nexus 5X:

Since we are still at Android 6.0, improvements to this feature could be witnessed in later versions. Let’s hope they learn more from custom ROMs & we see more features in the coming versions. Be ready for additions & subtractions from the current offerings of this hidden module. Some are of the opinion that this is their way of giving out options that developers have not been able to integrate to typical settings yet.

Read Next 3 Ways to Find Lost or Stolen Android Devices