Today, for the majority of us users out there, a life without internet seems almost impossible. If you are regular to this website and also have read most of my articles, you pretty much know by now that how much importance I give to apps. Sure, apps are a very important part of our mobile lives. However, for these apps to function, we would require an internet connection. The internet is as important as apps are. Moreover, through the internet, we get a wide range of information and is also in-turn a basis for a complete mobile life experience. Furthermore, Just internet is not enough, but, the speed of the internet connection should also be quite good. To check the internet speed on your Android device, naturally, an internet speed test app would be required. Speaking of internet speed test apps for Android, there are a plethora of them available in the Google Play Store. The internet speed test app for Android I have for you readers today is called Meteor.

Now, let’s take an in-depth look at the app as depicted by the screenshots below.

Must Read: Top 5 Android Apps You Must Not Miss (September 2017)

This remains as a floating icon in the edge of your screen. It shows you tips on how to use Meteor and more from time to time.

Do Not Miss: Check If Your Device is Vulnerable to BlueBorne Bluetooth Vulnerability

In the speed test results page, select an app to know how would it perform based on the speed test, Neat!. Moreover, tap on an app to view its performance details. Go through the next screenshot carefully.

Tap on Add apps located in the bottom right-hand side to add more apps to see how would they perform.

It shows you the test locations, the number of test done and more. Here, you also have the option to turn off Cosmo monster.

In this tab, you are shown all the tests you have done so far, sorted by date and time.

Tap the three line button to bring up this menu. Here you have the option to run a new speed test, access settings or invite a friend. Moreover, you also have an interesting option called Message Monster. Check the screenshot below to know about Message Monster.

Message Monster allows you to send your valuable feedback to the developers of Meteor for further improvement of the app.

Here you have accessibility settings and App Permissions settings.

Turn on the option to be able to send your valuable feedback to the developers to further improve the app in future updates.

And there you go Droidviewers and tech enthusiasts on my review of Meteor, an internet speed testing app that quite does the job. However, to be honest, based on my experience of using this app, I can say that this app is good enough only to get a right idea of how an app would perform. But, don’t get me wrong, the internet speed test is pretty much accurate.

Let me know in the comments section on your take and experience with the app. Download via the link given below. 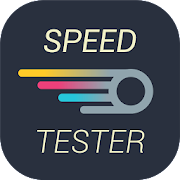