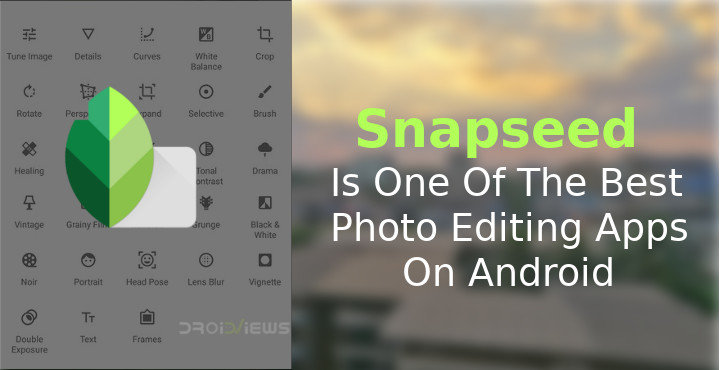 Android photography has really picked up the pace in recent years with great hardware and a software to match. So have the fun photo editing apps available for Android on the Google Play Store. There was a time when you could only apply some filters and effects, do some basic editing. Most Android apps are still within those limits. Perhaps because professional photographers use Photoshop anyway. These apps provide an easier option for the less than professionals. Since its inception though, Snapseed, the photo editing app by Google has taken photo editing on Android to a whole new level. This explains the loyal fan following it has amongst serious photographers who like editing photos on the go.

I’ve already said what I think about the app in the title, so go ahead and try the app out if you somehow missed it. Snapseed has been a popular choice amongst Google fans, Android enthusiasts and professional, or even wannabe professional photographers. Here, we’ll simply take a look at why.

Snapseed has many, many advanced features that it keeps gaining on further in regular updates. It used to be not very friendly to users who weren’t familiar with the details of photography. Snapseed, however, isn’t all complex and difficult anymore. With recent updates, Google has made Snapseed quite easier to use.

The default interface is very much like many of the other apps where you can simply choose an effect and apply it to your photo. There aren’t as many of these pre-built effects in the app yet, but the presence of a + button to the very right of this list as well as a three-dot menu button suggests we may soon have more. Neither of those buttons is functional as of version 2.18.0.

Advanced features are in Snapseed’s arsenal are why it is the best photo editing app, but it is also because of how easy the app makes using these features. I don’t do a lot of photo editing but when I need a photo to look beautiful and the way I like, I simply load it up in Snapseed, go to the Tools tab and get into Tune Image. This has been a part of Snapseed ever since the app was available and it continues to be my favorite tool in any photography app.

Most of the time I am not looking to whiten the eyes or apply filters or artistic effects.  What I want is a picture which looks colorful, crisp and nice. Snapseed’s Tune Image tool can work wonders and at times the pictures look much more beautiful than they did in real life even. The picture above is a very good example, sadly I’ve purposefully lost the original image. I never thought I’d be needing it.

In the screenshot above you can see a grid of all the advanced Snapseed tools. If you don’t have a lot of knowledge about photography learning Snapseed might be a good place to start. Some of these tools aren’t exactly all that advanced such as White Balance, Crop, Rotate, Text, Frames, Portrait, Lens Blur, and even Tune Image. Some are simply a group of filters such as Grainy Film, Vintage, Glamour Glow, Drama, Black & White, Noir, etc. These you can play around with ease. The advanced ones include Perspective, Double Exposure, Healing, Brush, etc. You can still play around with them.

You may also like: 5 Best Photo Editing Apps for Android

I have tried just about every “best” photo editing app on Android. PicsArt, Adobe Photoshop Express, and Toolwiz Photos to name a few, and some names I don’t even remember. Among those Toolwiz has perhaps as many, or even more features as Snapseed but it loses points when it comes to interface, which it wouldn’t, had I not used Snapseed before. It’s just easier navigating around Snapseed. I would be hardpressed to select between the two. And that’s why I wouldn’t call Snapseed the best photo editing app on Android, but it’s really close.