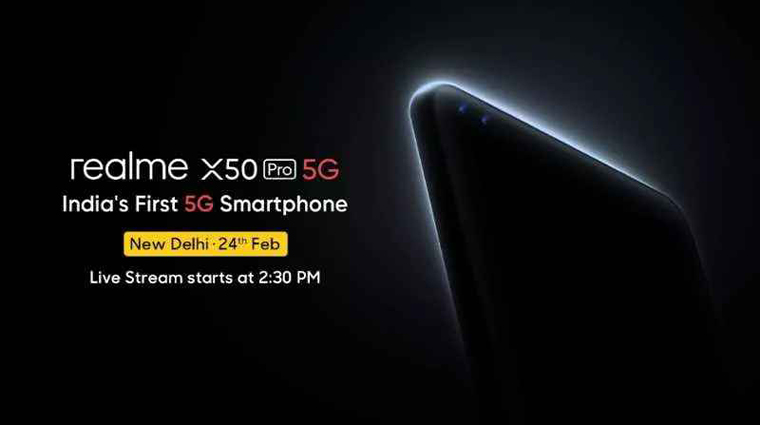 India does not have a 5G network at all. That isn’t stopping Realme, for some reason. Realme has announced that the Realme X50 Pro 5G launch will happen in India. Judging from the invites sent by the company, they even plan on marketing the 5G aspect of the phone.

Realme was originally going to launch the X50 Pro 5G at MWC 2020 but it was canceled. The company has now sent invites to members of the media confirming a February 24 launch. The invite sent out to the Indian media makes it clear that the launch will be an online event.

Although Realme will be hosting an event in Madrid on the same date for a global Realme X50 Pro 5G launch.

For India’s online-only event, the timing has been mentioned to be 2:30 pm IST.  The invite also mentions New Delhi as the place of launch despite being an online event. The company is also marketing the phone as “India’s first 5G Smartphone”.

Launching #realmeX50Pro at 2:30PM, 24th Feb. Excited?
RT using #real5G and stand a chance to get invited for the launch. pic.twitter.com/Ai8xsjK8uX

Realme has already confirmed some specs for the Realme X50 Pro 5G. For one, it will have the flagship Snapdragon 865 processor, unlike the Poco X2. The display will be a Super AMOLED panel with 90Hz refresh rates. While the company hasn’t mentioned the battery size, they have confirmed 65W fast charging.

Considering that, we can make a guess about the storage and RAM options for the Realme X50 pro 5G. The Realme X50 5G had 6GB and 12GB RAM variants with storage starting from 128GB and going up to 256GB. We can expect similar or better specs for the Reale X50 Pro 5G.

A 5G Phone in India?

As you probably know, India does not have a 5G network. Considering the state of 4G networks in the country, we can safely say 5G is not quite coming to India soon. The fact that the major telecom giants, Airtel and Vodafone are under huge government debt already, the future of 5G in India does not look very bright for at least a few years.

Therefore, Realme bringing a 5G phone in India, and then marketing it on that basis, seems… stupid. The only reason I can think of is they just want the honor of bringing India’s first 5G smartphone. It may also be that the company is hoping to trick some customers into buying a feature they can’t even use. The cost of a 5G phone is significantly more than a 4G phone, after all.

At least the phone will still work on 4G networks.