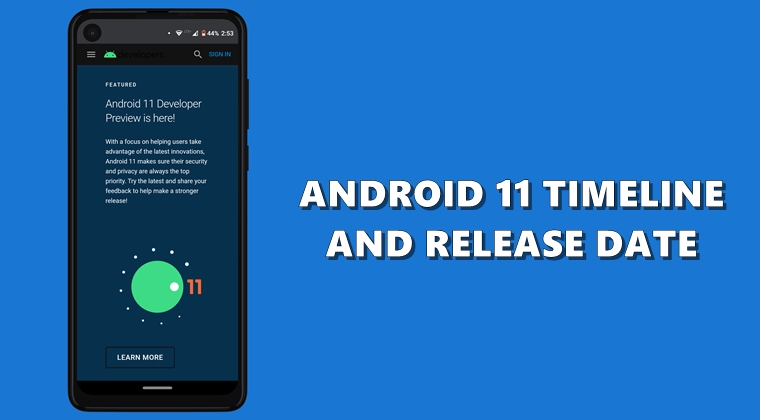 Much ahead of its schedule, Google today kicked off the first Developer Preview build of the latest Android iteration. This preview by no means could be used as your daily driver. It might be unstable and will have many features that are either half baked or non-functional. Well, this is completely understandable, considering it is just the first developer version only. As we see the progression towards further developer previews and beta builds, you should expect it to be much more stable with working features. So when are you likely to see future developer builds or beta versions? In this guide, we will be listing the complete timeline of Android 11, right from the first developer preview all the way up to the stable version. So let’s begin.

To begin with, Google will release a total of three Developer Previews. This will then be followed by three Beta builds. And once these six have made their way, you could expect to see the stable build. With that said, here is the breakdown of the timeline for the developer previews and beta builds of Android 11.

For the unaware, Google today released the first Developer Preview build of Android 11. If anyone of you are interested, check out our guide explaining the steps to install Android 11 DP1 on your Pixel devices. Being the initial build, don’t expect it to be fully functional. It might take further DP or beta releases for it to be somewhat functional and stable.

With that said, you could expect the next Developer Preview to land anywhere around the month of March. This will be incremental with additional features, APIs, and behavior changes.

The third and final Developer Preview will be available in the month of April. in this update, you could expect further incremental updates for stability and performance. Let’s now have a look at the timeline for the Android 11 beta builds.

Once all the three developer previews have seen the day, you could expect the release of Beta 1 in the month of May. It will be available as an OTA update to those who are enrolled in the Android Beta program. Up until this point, all the DP builds had to be flashed manually over to your devices. But with the beta builds, you are entitled to receive the OTAs if you qualify all the requirements.

With the second Beta build, you could expect it to be much more stable in terms of performance. This will make its way in the month of June. In the Android 11 timeline, Google calls this second beta a performance stable milestone. This means that Android 11 has reached final internal and external APIs, final app-facing behaviors, and final non-SDK graylists.

From this point in time, there will be no significant changes in this iteration of Android that might affect apps. So the developers could take this milestone as the final planning, compatibility testing and future release of their Android 11 compatible apps.

The last of the beta builds before the stable version will be made available in the third quarter of 2020. With this version, developers will be required to release compatible updates for apps, SDKs, and libraries. Finally, the stable build will see the light anytime around Q3 of 2020.

So this was the complete timeline and schedule for the Android 11 launch. We will be regularly posting all the required information regarding these developers’ previews, beta, and the stable builds, as and when it gets available.