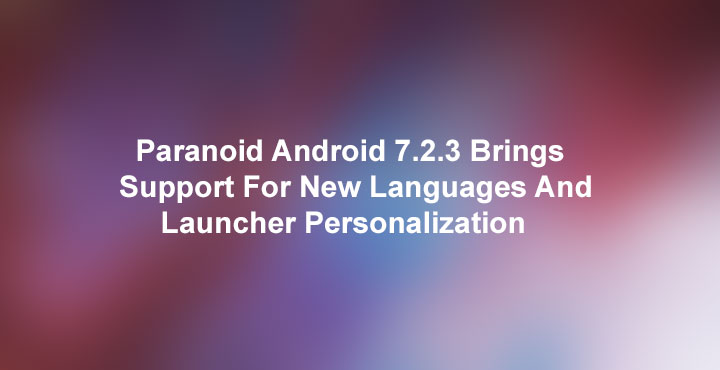 The Paranoid Android ROM has been one of the most well-received custom ROMs. We’ve previously talked about this fan favorite custom ROM before as well. The ROM made a successful return after it went out of development. The team behind it has been expanding the ROM to more devices and adding carefully crafted new features. Quite recently, the Paranoid Android 7.2.1 update was released which added a few features to the ROM for the community to learn from and improve upon. These include their PIE controls system, the PA-exclusive Color Engine, Accidental Touch (Prevention), Pocket Lock, and Three-Finger Swipe Screenshot. The previous update also expanded support for new devices.

The ROM is under constant development and it was only a matter of time before another update was released. Paranoid Android 7.2.3 is out now with even more refinements and fixes over the previous 7.2.1 update.

The team behind the ROM had previously added support for translating PA to other languages via Crowdin. As a result of that, and the help of community members who contributed to the translations, the ROM now supports many new languages. The new update includes the following new languages :

Other than support for new languages, PA 7.2.3 adds new features to the stock launcher. There aren’t a lot of changes but a couple of new personalization features have been added which include icon customization and app labeling. Not only can you now apply third-party icon packs but also pick individual icons for individual apps from different icon packs like you would do on some third-party custom launchers. You can access the new personalization menu by long pressing an empty space on the home screen. You can also hold and drag an app upwards and drop it on the Edit option that appears to change its icon or label.

On top of these little but very welcome additions the update improves on several features brings an updated PA browser and also fixes various issues.

Like last time, there are quite a few device specific changes for various devices.

The AOSPA team warns that their Paranoid OTA may not update to this release version and users will have to manually flash the updated ROM. Patches included in the update will fix such issues for future OTA updates as mentioned in the changelog. You can download the ROM for specific devices by clicking the name of the device above or visiting the official PA download page. If you need any help flashing the ROM, we have a general guide on how to flash a custom ROM that you can check out.