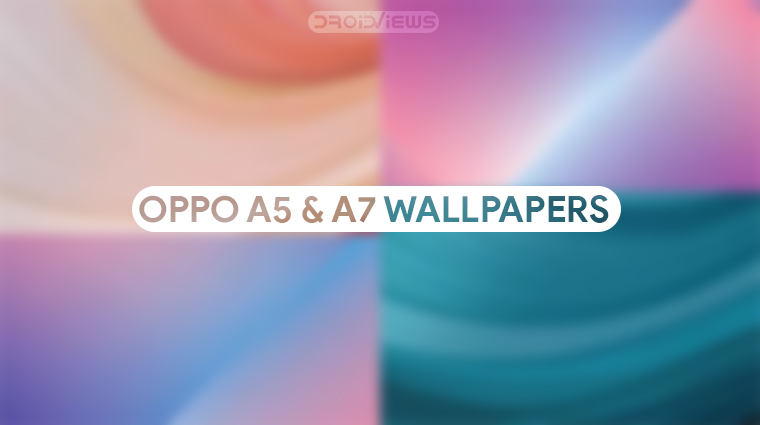 Oppo’s strategy is obviously to confuse the customer with so many choices that it’s impossible to not consider an Oppo phone. For every price point, Oppo has a phone. The Oppo A and Oppo A7 are also one of those ambiguous smartphones from the company. Despite not offering any distinct advantages or selling points, the devices do come with some interesting wallpapers. The Oppo A5 and A7 Wallpapers are available for download below.

This smartphone was released way back in 2018 so it looks like that too. For 2018, the design isn’t too bad since most phones at the time had those big notches and a thick enough bottom chin. Like most cheaper phones, it is made of plastic which has been made to look like glass. It’s of course not as scratch resistant as glass. The back of the phone also has a beautiful pattern that comes alive when light reflects off of it. The look and feel are very similar to the Realme 1.

The dual camera array is horizontally aligned on the left along with an LED flash. The Oppo logo sits just above the center of the back and the oval-shaped fingerprint scanner is right above the logo. The notch on the front houses the front camera, proximity, earpiece, and an ambient light sensor.

The left edge of the device has the volume keys and the Dual SIM tray with a dedicated MicroSD slot. On the right is the Power button. On the bottom is a micro USB 2 .0 charging port, a speaker grill, and the headphone jack is at the top.

The Oppo A7 was launched a little later in 2018 and it shows in the size of its notch. It sports a much smaller water-drop notch at the front giving it a more modern look than the long notch on the Oppo A5. The plastic body has a matte finish on the sides and a laminated back. The textured pattern looks good when light hits it at certain angles. There is a SIM tray on the left which accepts two nano-SIMs and a microSD card. The Volume rockers are also on the left with the Power button being on the right. All the ports are at the bottom, include the Micro-USB port, 3.5mm headphone jack, microphone, and the speaker grill.

On the back is a dual camera set up, aligned horizontally along with the LED flash. The module has also been given a slight protrusion. The fingerprint reader sits above the Oppo logo just like the A5.

The specs for both the smartphones are not very impressive for the price compared to other Chinese OEMs, even considering the time that they were launched in. Other than the names and the notches really there are not a lot of difference between the two devices. The pack the same processor, are offered in the same RAM and storage variants, have identical cameras, same battery, even the same Android version.

Oppo A5 and A7 Wallpapers

The Oppo A5 and A7 wallpapers pack contain four wallpapers with a resolution of 720 pixels by 1520 pixels. This is the same resolution as the displays on both these devices, by the way. The wallpapers below are compressed JPEGs, even though the resolution is still the same. These are good enough for demonstration.