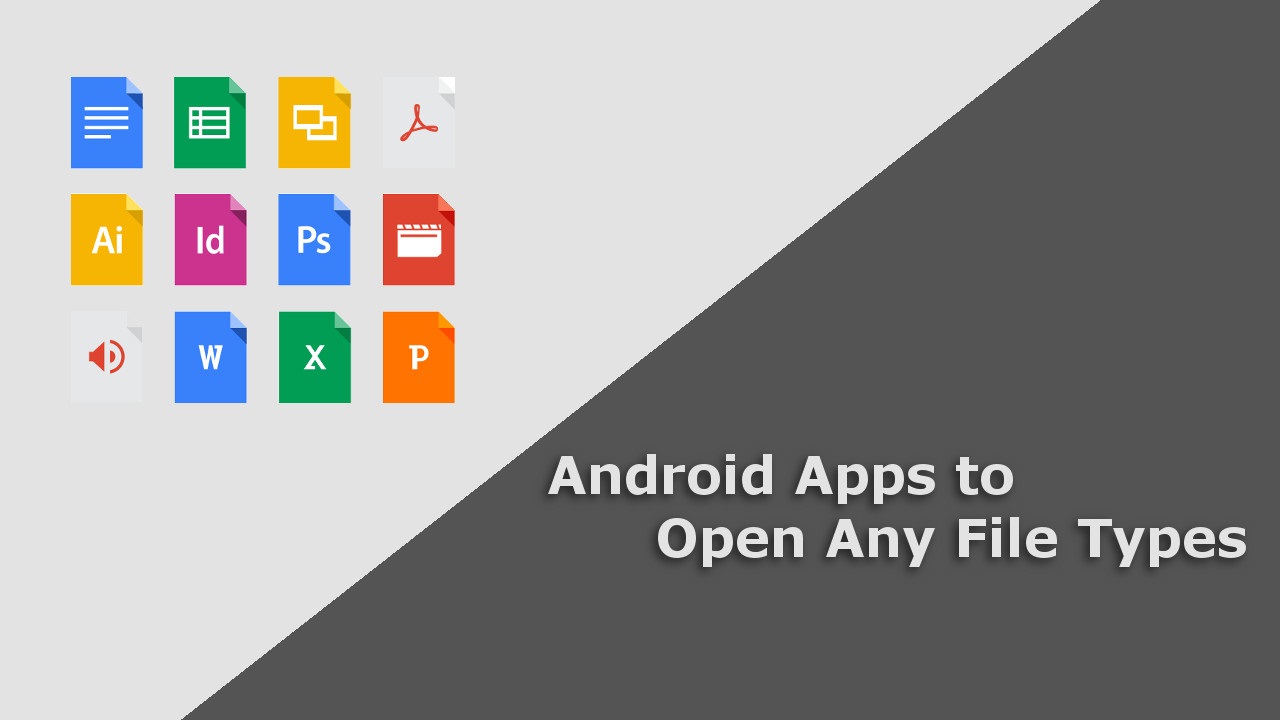 Android is one of the most widely used operating systems across the globe. However, at times there are files types which Android is unable to open. This is because of either of the two reasons. First, it may not have the necessary apps required to open that kind of file extension (for instance- .zip, .dng, .pdf). Second, the file type is not meant to open that, is, it cannot be modified or read (for instance- .bin, .dat).

For the second type of issue, nothing can be done as it has technical stuff involved. Moreover, I don’t know why anybody will open those files in the first place. Moving on to our first reason which can be easily solved by using different types of apps available on the Google Play Store. Below is a list of apps to play, edit or open all file types on Android devices.

There are a lot of apps available in the Google Play Store that lets users read, edit and modify office files. Office files include DOCX, XLSX, PDF, PPT, PPTX, ODT, RTF, ODS, TXT and a few more. Out of many apps available, these three are the best in their category. WPS Office + PDF, Google Drive and Microsoft Office Mobile.

Some smartphones even have one or more of these apps pre-installed. Above is a table giving an overview of the file types supported by these three apps.

In order to read eBooks on Android one needs a reader app which doesn’t come pre-installed on Android devices. There are a lot of apps that can do this but I would suggest Cool Reader and Aldiko Book Reader. The interface of the Cool Reader app is just brilliant. The way the pages turn is very eye pleasing.

Above is a table to give you an overall view of the file types supported. Both of the above-mentioned apps have a dedicated eBook store where you can buy books and get some of them for free. It is sure a really nice experience.

Almost all the devices have Google Photos pre-installed. For basic stuff, like opening and editing .jpg, .jpeg, .png type of images, it is good. But for advanced stuff, it does not prove to be that handy. For that, there is an app named RawDroid Pro.

However, it is a paid app so I wouldn’t suggest to buy it until you really need it. There is a demo version of this app which I would suggest you try before purchasing the full version. The RawDroid Pro is very efficiently designed and the UI looks great. This app is capable of handling a large variety of formats which includes,

However, an important thing to note is that the app has been discontinued in favor of Android 6.0. But still, it works with a lot of smartphones. At least the demo version is worth giving a shot. An alternative to this app could be the Bonfire Photo Editor Pro or the Adobe Photoshop Express.

There is nothing much to say about this. We all know it is the VLC Media Player. The best app to play videos on Android devices. It can handle almost all types of formats including .mp4, .mkv, .3gp, .avi, .wmv, .flv, .mov and many more.

On top of that, it has some useful features such as subtitles, auto-rotation, correction of aspect ratio, etc. My personal favorite is that brightness and volume can be controlled using gestures. Not to mention the app also has a widget which works great.

Apart from this, there are other options to look at such as the MX Player and the BS Player. All of the three apps have similar features and feel comfortable to use. One thing which I love about the MX player is its ability to bookmark any video so that when we open the movie again it will begin from there.

The default Android music player generally the Google Play Music can handle audio files with extensions .mp3, .m4a, .flac, and a few more. However, in reality there a lot more formats than these which are capable of delivering better sound quality.

Formats such as- OGG, WMA, ALAC, APE will require some other app. Poweramp Music Player and MortPlayer Music are some good apps to check out.

Above is a table which gives an overview of the file types supported. The Poweramp Music Player is the best app and gets more than the job done. However, it is a paid app. There is a trial version available for users to try it. If free is your cup of tea then MortPlayer Music is the best alternative.

Most of the file explorers such as the ES File Explorer or the Solid Explorer can get the job done. Nevertheless, if you are looking for an app that can unpack any type of file then B1 Archiver and AndroZip should be more than sufficient.

Above is a table which gives an overview of the file types supported. However, in reality, the B1 Archiver supports the following type of files,

That’s it, guys. I have covered almost all supported file types that are necessary and can be opened by Android. Please let me know in the comments section below if there is any way in which I can improve this guide, be it by adding information or reworking the wording.