Of late, Android has been opened up to navigation bar customizations. We’ve seen options to customize it, to some extent, being present in developer previews of Android Nougat. The feature was removed in the final build but the code was still present. Which is why you may have noticed quite a few navigation bar apps pop up on the Play Store. When the Google Pixel hit the scene, we were all in awe of the beautiful home button animation. Now, that was an idea but why stop there? prithvee‘s NavBar Animations builds up on the idea of a nice visual animation when pressing the home button.

NavBar Animations is a free to install app available on the Play Store. The app is ad-supported and it is also free to use, to an extent. We’ll talk about that in a bit. 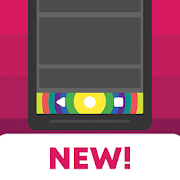 When you have the app installed, most of the work is done already. NavBar Animations does not require any special privileges like Accessibility or the permission to draw over other apps. You can simply launch the app and enable it using the toggle in the top right corner.

The first thing that strikes you about the app is how nicely it has been designed. You’ll be presented with a Card style UI, each card representing a certain category. Each category contains within itself 5 different animations. There are a total of 13 such categories in the app, as of now. Currently, the app sits on version 1.1 but it will most probably be updated with new animations and categories. For the time being, here are the categories you can choose from :

Tap on a category that fancies you and you will see five animation cards which luckily are animated so you can see exactly what you’re applying. To apply an animation, just tap on it and done. If you want though, you can change a few things about the animation by tapping the gear icon in the top right.

Also read: Get Swipe to Go Home Gesture from iPhone X on Any Android

With each of these categories containing 5 different animations, you get a total of 65 animations. That should be more than enough to keep you happy for a while. But …. yes, of course, there’s a but. You can not apply just about any animation you want unless you purchase the full version of the app.

Most of the animations after the first few categories are locked behind an in-app purchase of $1.99/₹100. The said in-app purchase also removes all the ads that you might have already noticed if you installed the app. This is a one-time payment and the developer promises that once you have paid the said amount, you’ll be able to use all the animations that are added in the future as well.

It does not take long once you open the app to recognize the care with which the UI was designed and crafted. It’s simple yet fancy. There are a few animations that are simply there for the sake of being there. Meaning, you’d think that the animations should start out from the home button and spread out like they do in the Google Pixel animation. But perhaps it was not intended to be the way we thought it should have been. This is really just nitpicking here but that sort of animation just seems more natural. To be honest, most of the animations did start out the way we wanted. The $1.99 price tag does not seem like a lot to ask for such a quality app really. With promised updates to the already available 65 animations, you’re in for a sweet deal.